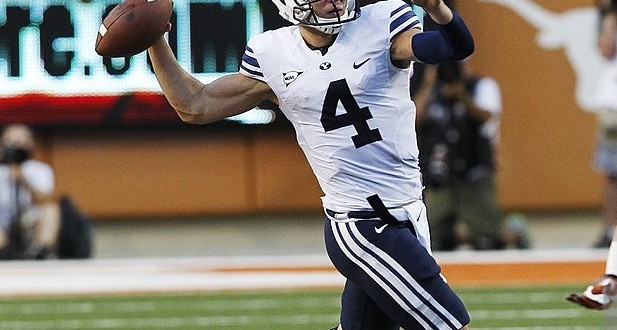 Hill, who is coming off ACL and MCL surgery, is the heart and soul of the BYU Cougars entering 2015. Last year, Hill was on his way to a possible Heisman Trophy campaign before getting injured in the loss to Utah State. Hill is a dual threat quarterback who completed 66.7% of his passes for 975 yards with 7 touchdowns and 3 interceptions in 5 games last season. On the ground, Hill muscled his way to 463 yards averaging 5.3 yards per carry with 8 touchdowns. Hill led BYU to a perfect 4-0 record in victories over UCONN, Texas, Houston and Virginia before injuring his knee. If the Cougars are to have a successful season, they need their leader to come back to 2014 form. BYU has one of the toughest schedules in the nation with 8 bowl opponents on their schedule including: Nebraska, Boise State, UCLA, East Carolina, Cincinnati, Missouri, Fresno State and Utah State. Not to mention Jim Harbaugh and the Michigan Wolverines in week 4.
2) Joshua Dobbs QB Tennessee-

Tennessee has struggled in recent Bouncy Castle years to get consistent quarterback play and that has cost the Volunteers success in the SEC East. The Volunteers have been known to have a great history of college quarterbacks over the last two decades with players such as: Andy Kelly, Heath Shuler, Peyton Manning, Tee Martin, and Casey Clausen. However, Joshua Dobbs can be the best dual threat quarterback many Volunteers fans have seen in over 15 seasons. In 2014, Dobbs completed 63.3% of his passes for 1,206 yards with 9 touchdowns and 6 interceptions. On the ground, Dobbs rushed for 469 yards averaging 4.9 yards per carry with 8 touchdowns. Making his first start on the road against South Carolina on November 1, 2014, Dobbs exploded in leading the team with over 500 yards of total offense in the double overtime victory. Dobbs led the Volunteers to 4 of 5 victories over South Carolina, Kentucky, Vanderbilt and Iowa. At the helm, Dobbs help direct the Volunteers offense to average 41 points per game in his four victories as starting quarterback. Prior to Dobbs being named the starter, Tennessee averaged 23.8 points per game in the previous 8 games. Dobbs developed all season and showed poise in the pocket. He became more acclimated in his decision making and in the season ending victory over Iowa, it was clear that Joshua Dobbs was the leader of the offense. In order for head coach Butch Jones and the Volunteers to make some noise in the SEC East this year, the team will need their junior quarterback to break out and build on last season’s success.
3) Deshaun Watson QB Clemson-

In 2014, Boston College was a dominant run heavy offense that battered opponents with a physical offensive line that featured five graduate seniors. The Eagles rushed for 254 yards per game including their dominating 452 yard (8.3 yards per carry) rushing performance against USC and defensive tackle Leonard Williams (37-31 victory in Chesnut Hill). The Eagles rushed for over 100 yards in each of their 13 games and will need an inexperienced offensive line to gel early on this year if the team is to have success within the ACC. Led by senior Harris Williams, the team hopes that the offensive line can have success in opening holes for the running game with running back Jon Hillman leading the way. The Eagles should have a couple of weeks to experiment with different players as the team opens up with Maine and Howard in back to back weeks at home. However, there will be no margin for error as Florida State comes to Chesnut Hill with new quarterback Everett Golson leading the Seminoles in week 3.
5) Samaje Perine RB Oklahoma-

While former Sooners running back Keith Ford has left Norman and transferred, Oklahoma’s offensive success falls solely on the shoulders of running back Samaje Perine in 2015. Bursting onto the scene last year as a freshman, Perine ripped opponents for 1,713 yards averaging 6.5 yards per carry along with 21 touchdowns on the ground including a record setting 427 yard performance against Kansas. The Sooners struggled throwing the football last year and became very one dimensional in their offensive play calling. The inconsistency and injuries to quarterback Trevor Knight forced Perine to step up and lead the offense. However, with new offensive coordinators in place for 2015 along with the unsettled quarterback situation between Knight, Baker Mayfield and Cody Thomas- Oklahoma will turn to running back Samaje Perine to wear down opposing defensive fronts. If head coach Bob Stoops is to rebound from a disappointing 2014 campaign (lost to 5 Top 25 teams), he will need Perine to continue to develop and take the pressure off of the offensive line.
6) Duke Williams WR Auburn-
With new quarterback Jeremy Johnson at the helm , Tigers head coach Gus Malzhan has vowed to have a dynamic passing attack to go along with his prolific running game. Johnson excels throwing from the pocket and has shown glimpses of greatness in his limited role last season. With big play wide receiver Sammie Coates departure to the NFL Draft (Rd. 3 Pittsburgh), Auburn’s passing offense will need to revolve around wide receiver Duke Williams. The pressure will be on Williams, who battled injuries last year to build upon a solid 2014 campaign. Last season, Williams led the team with 5 touchdown receptions and recorded 45 receptions for 730 yards averaging 16.2 yards per catch. However, with Coates lining up on the opposite side of Williams, teams could not double team both receivers. Coates’s speed took the top off of the defense and allowed Williams to get free on dig routes over the middle. Williams was solid in his route running and will need to become the leader of the receiving corps in order for Auburn to make a run at the 2015 SEC West title. He has great size standing 6’2 and weighing 215 pounds and will need to be healthy for the Tigers to have a potent passing attack.
7) Christian Hackenberg QB PSU-
While Penn State struggled in 2014 with an inconsistent offensive line, quarterback Christian Hackenberg took a step back in his development with new head coach James Franklin. Penn State ranked 119th overall in the nation allowing 44 sacks and continuously allowed pressure on Hackenberg. Hackenberg completed 55.8% of his passes for 2,977 yards with 12 touchdowns and 15 interceptions. Hackenberg made poor decisions and has shown that he is not comfortable throwing on the run. In order for Penn State to rebound from a mediocre season, the team will need their quarterback to step up and become a leader. The Nittany Lions averaged 20.6 points per game and were forced into becoming conservative due to Hackenberg’s inconsistencies. The schedule is not an easy one for the Nittany Lions as the team squares off against Temple, San Diego State, Northwestern, Maryland, Illinois, Ohio State, Michigan State, and Michigan.

8) Pharoh Cooper WR South Carolina-
Cooper had a dynamic season in 2014, catching 69 passes for 1,136 yards and 9 touchdowns. Cooper is the main offensive weapon on a team that averaged 32.6 points per Bouncy Castle For Sale game and averaged 282 passing yards per game. However, with quarterback Dylan Thompson graduating and running back Mike Davis entering the NFL Draft, the Gamecocks and head coach Steve Spurrier will need to find ways to get the ball to his senior wide receiver. Cooper had some amazing performances in 2014 including a 9 reception 170 yard (1 touchdown) performance over the Miami Hurricanes in their bowl victory. Cooper has great hands along with top end speed to find holes in opposing secondaries. With inexperience at the quarterback position entering the 2015 campaign, South Carolina’s offensive success will hinge on getting the ball into Cooper’s hands early and often
9) Devontae Booker RB Utah-
The Utes have a run first mentality built with a physical offensive line that plays ground and pound football. Head coach Kyle Whittingham instilled a blue collar attitude that is evident on both sides of the ball. Last season, Utah averaged 31.3 points per game and featured running back Devontae Booker as their main offensive weapon. Booker led the team in rushing with 1,512 yards averaging 5.1 yards per carry with 10 touchdowns. Booker accounted for 51% of the rushing touches on offense and accounted for 61% of the rushing yards for the team in 2014. Booker is a great receiver coming out of the backfield and was third on the team with 43 receptions for 311 yards and 2 touchdowns. Booker has deceptive speed and is a solid between the tackles runner that can lead the Utes to a possible PAC-12 title. However, if Utah is to have continued success in the league this year, the Utes will need another breakout season by Booker. Quarterback Travis Wilson struggled with consistency and Kendal Thompson (QB) is coming off a season ending injury (knee). The Utes face a difficult schedule that features Michigan, Utah State, Fresno State, Oregon, USC, ASU, UCLA, Arizona and Washington.

10) Dak Prescott QB Mississippi State-
Prescott led the Bulldogs to the #1 ranking entering their 2014 matchup with the Alabama Crimson Tide in Tuscaloosa. Prescott is a legitimate Heisman candidate and will make or break his team in 2015. Last season, Prescott led an offense that averaged 36.9 points per game and defeated Texas A&M, Auburn and LSU in convincing fashion. Prescott completed 61.6% of his passes for 3,449 yards with 27 touchdowns and 11 interceptions. On the ground, Prescott ripped opposing defenses for 986 yards averaging 4.7 yards per carry and 14 touchdowns. While Prescott has great ability, the 2015 will hinge on his progression in the passing game. Former running back Josh Robinson has moved onto the NFL (Indianapolis) and was Prescott’s main safety valve coming out of the backfield. Prescott struggled in losses to Alabama and Ole Miss in reading his progressions in the passing game. In order for MSU to take the next jump in the SEC West, Prescott must continue to develop and perfect his game. Bulldog fans are hoping that Prescott starts his 2015 season fast and is consistent from start to finish. The schedule features LSU, Auburn, Texas A&M, Alabama, Missouri, Ole Miss and Arkansas.

Joseph Lisi is a member of the FWAA (Football Writers Association of America), the Maxwell Football Club and the National Football Foundation. He is the owner of the website: www.goforthe2.com and hosts a weekly college football radio show on SB Nation Radio and FNSTY Sports Radio from 10-12pm EST every Saturday morning. Listen live at: www.sbnationradio.com or www.fntsy.com/radio. Joseph is a former college football researcher for ABC Sports and has been featured on: SportsXRadio with Ken Thomson, ESPN Radio, Sirius XM Radio, FNTSY Sports Network, the Sid Rosenberg Show (640 AM Sports-South Florida), 1560 AM CBS Sports Melbourne, FL and multiple media outlets throughout the nation. Joe appears every Friday with Ken Thomson on SportsXRadio for the Football Fiasco in which every game on the college board is broken down during the show. Follow Joe on Twitter: @goforthe2
@https://twitter.com/GOFORTHE2
Previous Donte Stallworth Speaks With Joe Lisi
Next Amos Zereoue Speaks With Joe Lisi At The Boomer Esiason Empire Challenge