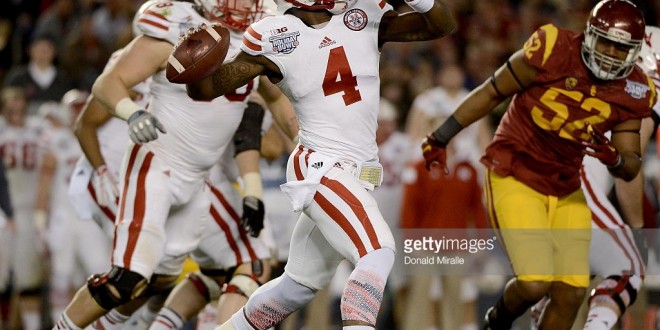 BYU vs. Nebraska Week 1 “Inside The Numbers”

BYU looked like a potential “Playoff Bracket Buster” as the Cougars roared to a 4-0 record in victories over UCONN, Texas, Houston and Virginia. In the four victories, BYU averaged 37.5 points per game with the combined record of those opponents standing at 21-29 (.420%). However, after quarterback Taysom Hill went down in the loss to Utah State, the team dropped four straight with backup quarterback Christian Stewart (25 TD’s 9INT’s) failing to lead the team to victory. In the four losses in the middle of the season, the Cougars averaged 27.2 points per game against Utah State, UCF, Nevada and Boise State. The combined record of those four opponents was 38-16 (.703%). In the four victories at the end of the year, Stewart and the offense came to life, and the team Bouncy Castle responded averaging 43.7 points per game in beating up on opponents with a combined record of 13-36 (.262%).

The Cougars had a very balanced offense in 2014 averaging 278 passing yards per game (27th overall) and rushing for 181 yards per game (49th overall). BYU struggled on the offensive line with the unit allowing 36 sacks which ranked 100th overall in the country. BYU struggled with turnovers in 2014, finishing with a -1 in turnover margin. The Cougars did not play “clean” in Provo finishing with a -6 turnover margin at home.

BYU will need Hill to bounce back and be healthy if they are to make a run at the playoff in 2015. BYU has the type of schedule to make a playoff run considering that the Cougars play Nebraska, Boise St., UCLA, Michigan, East Carolina, Cincinnati, Missouri, Fresno St. and Utah State.

Expectations will be high in Lincoln with new head coach Mike Reilly (former Oregon State HC) taking over for Bo Pelini. The Cornhuskers finished the 2014 season with a 9-4 overall mark. However, all four losses were to Top 25 competition (Michigan State, Wisconsin, Minnesota and USC) and three of the four losses were on the road or on a neutral field site. Nebraska had the 19th best rushing attack in the nation in 2014, averaging 240 rushing yards per game. In the Cornhuskers four losses, however, the team averaged 120.7 rushing yards per game.

The team averaged 37.8 points per game (13th in the nation) in all 13 games in 2014, however, in the Cornhuskers nine victories-the team averaged 42.1 points per game. Nebraska finished the 2014 season with a -2 in turnover margin and struggled as a defensive unit in creating turnovers. The Cornhuskers created 23 total turnovers which ranked 41st overall in the nation (1.76 turnovers per game). Part of the defensive woes centered around generating a pass rush against opposing quarterbacks. As a defensive unit, the team finished the 2014 season with a total of 29 sacks. The pressure will be on the defense to make up for losing DE Randy Gregory who led the team with 7 sacks. Nebraska must get better in stopping the run and will be tested by BYU in this ball game. Nebraska surrendered 177 rushing yards per game in 2014.

Joseph Lisi is a member of the FWAA (Football Writers Association of America), the Maxwell Football Club and the National Football Foundation. He is the owner of the website: www.goforthe2.com and hosts a weekly college football radio show on SB Nation Radio and FNSTY Sports Radio from 10-12pm EST every Saturday morning. Listen live at: www.sbnationradio.com or www.fntsy.com/radio. Joseph is a former college football researcher for ABC Sports and has been featured on: SportsXRadio with Ken Thomson, ESPN Radio, Sirius XM Radio, FNTSY Sports Network, the Sid Rosenberg Show (640 AM Sports-South Florida), 1560 AM CBS Sports Melbourne, FL and multiple media outlets throughout the nation. Joe appears every Friday with Ken Thomson on SportsXRadio for the Football Fiasco in which every game on the college board is broken down during the show. Follow Joe on Twitter: @goforthe2
@https://twitter.com/GOFORTHE2
Previous 2015 Week 1 Inside The Numbers
Next ASU vs. Texas A&M Week 1 “Inside The Numbers”

Since WR Ipse Lorum has decided to go pro, he has climbed up the draft ...