Home / College Football Analysis / Louisville vs. Auburn 2015 “Inside The Numbers” 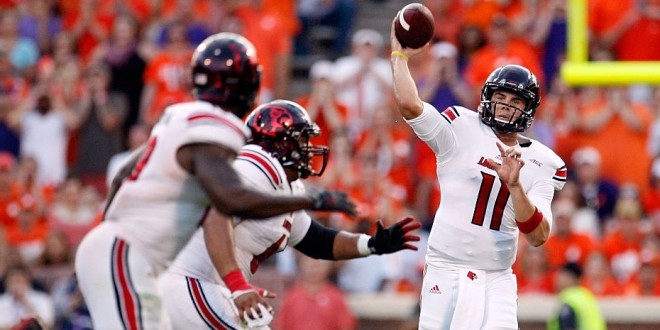 Louisville vs. Auburn 2015 “Inside The Numbers”

Notes: The Cardinals played only one Top #25 team during the regular season (FSU).

Louisville:
The Cardinals finished the 2014 season with nine victories on their resume. The combined record of those opponents was 47-65 (.419%). Of the Cardinals four losses in 2014, the team struggled against the stronger teams on their schedule and the combined record of the Cardinals losses was 38-14 (.730%). Louisville excelled when the offense was scoring points. The team averaged 31.2 points per game which ranked 51st overall in the nation. In the Cardinals nine victories in 2014, the team scored an average of 35.7 points per game. On the contrary, Jumping Castle in the four losses, the team averaged 20.7 points per game and was outscored by a 74 to 38 margin in the second half of those defeats. Offensively, the Cardinals had a pass first mentality led by their head coach Bobby Petrino. Louisville ranked 47th overall in passing offense averaging 252 passing yards per game. The team ranked 95th in the nation in rushing offense averaging 142.7 rushing yards per game.

Louisville finished the 2014 season with a +4 in turnover margin and the 6th best statistical defense in the nation allowing 308.5 total yards per game. The Cardinals defense excelled in getting pressure on opposing quarterbacks as the defense recorded 41 total sacks which was the 9th best sack total in the country last year.

The Tigers lost five games during the 2014 season and four of the five losses were to Top 25 competition. As the season wore on, the Tigers struggled down the stretch losing three of five games in the month of November. The Tigers had a very high octane offensive attack that averaged 35.5 points per game last year. However, in the Tigers five losses, the team averaged 28.6 points per game. More importantly, the Tigers struggled with ball security in those games committing 12 turnovers in those games. On the year, the Tigers finished with a +7 in turnover margin. The Tigers will lose quarterback Nick Marshall, running back Cameron Artis-Payne and wide receiver Sammie Coates. Marshall and Artis-Payne accounted for 24 of the Tigers 32 rushing touchdowns last year (75%). Coates led the team with 741 receiving yards and had 4 touchdowns during the 2014 season. The offensive line played very well in allowing 15 total sacks as unit last season.

The post Louisville vs. Auburn 2015 “Inside The Numbers” appeared first on Magazine.
Source: goforthe2