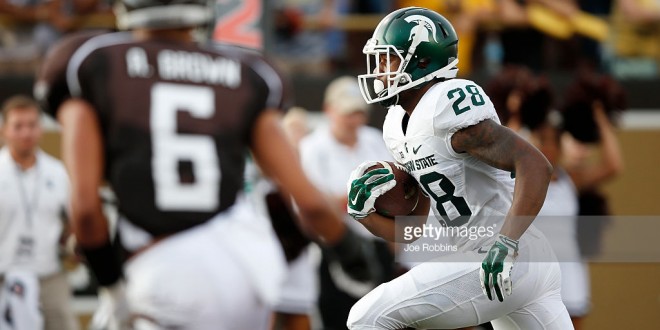 Week 2 Oregon vs Michigan State “Inside The Numbers”

Notes: Since 2011, Michigan State is 11-10 vs. Top 25 competition. Over the last two seasons, however, the Spartans are 6-3 overall against the top 25 including bowl victories.

The Ducks won last year’s battle against Michigan State in  Autzen Stadium 46-27. In last week’s victory over Eastern Washington, Oregon accumulated 732 total yards of offense. The Ducks recorded 485 rushing yards and averaged 8.5 yards per carry in the 62-41 victory. Quarterback Vernon Adams Jr. was solid completing 19 of 25 passes for 246 yards with 2 touchdowns and no interceptions. Adams Jr. also added 94 rushing yards on the ground averaging 6.7 yards per carry. Last season, the Ducks averaged 234 rushing yards per game and will need to run the football Saturday night against a solid Spartans defensive front. Last year, Oregon converted 49% of the their third down conversions and on Saturday night, the Ducks were 5 of 10 on third down attempts. However, against ranked top 25 competition last season, Oregon’s third down conversions dropped to 38%. To keep the pressure off of Adams Jr. who will be making his 2nd career start for the Ducks on the road, the team will need to run the football and put the offense into manageable situations.

Defensively,  Oregon feasted last year on turnovers. The Ducks had the best turnover margin in the nation with a +23 ratio and will need to create turnovers in East Lansing. In last Saturday’s win, Oregon won the turnover battle 2 to 1 against the Eagles. The Ducks will have to continue to force turnovers throughout the season, but to get this victory on Saturday night, they will need to win this battle against Michigan State quarterback Connor Cook. In 2014, Oregon struggled in the secondary allowing 264 passing yards per game, however, on the road/neutral the Ducks allowed 283 passing yards a game to their opponents. In Saturday’s victory, the Ducks’ weakness continued to show as Oregon allowed Eastern Washington to pass for 438 yards with the secondary giving up five touchdowns through the air to Eastern Washington.

The Spartans had a very balanced attack in the team’s week one victory over Western Michigan.  The Spartans rushed for 196 yards on the road and passed for 256 yards en route to a 452 total yard performance over a solid MAC opponent. Michigan State excelled in third down situations last week as the Spartans converted 10 of 15 third downs to consistently keep drives alive. Last year, Connor Cook completed 58.1% of his passes on his way to solid 2014 campaign (24 TD’s, 8 INT’s). In last Friday’s victory, however, Cook completed under 50% of his passes (15 of 31-48.4%) and seemed to miss his former big play wide receiver Tony Lippett. Two freshman running backs stepped up in their first game with LJ Scott and Madre London combining for 136 yards and 2 touchdowns. Last year, Michigan State rushed for 235 yards per game and at home the Spartans rushed for 244 yards per game. In order to keep the Ducks offense off the field, Michigan State will need to run the football. In last year’s loss, the Spartans feel behind early and had to get away from the running game which hurt Connor Cook. The team managed to rush for 123 yards and averaged 3.4 yards per carry in last year’s loss and will need a much better effort on Saturday to get the win.

Defensively, the Spartans were very opportunistic and had a +18 turnover margin which was a top 5 statistic in FBS last year. In Friday’s win over Western Michigan, the Spartans won the turnover battle 2 to 1. The strength of the Spartans is the interior defensive line that allowed 88 rushing yards per game last year. In the team’s week one victory, Michigan State held the Broncos to 18 rushing yards and a meager 0.8 yards per carry. Last year, Michigan State allowed 227 passing yards per game and Western Michigan quarterback Zach Terrell exploited holes in the Spartans secondary last Friday. Terrell completed 33 of 50 passes and threw for 365 yards with two touchdowns. This can be a factor on Saturday night if Michigan State’s secondary is affected by the pace of Oregon’s offense.

Joseph Lisi is a member of the FWAA (Football Writers Association of America), the Maxwell Football Club and the National Football Foundation. He is the owner of the website: www.goforthe2.com and hosts a weekly college football radio show on SB Nation Radio and FNSTY Sports Radio from 10-12pm EST every Saturday morning. Listen live at: www.sbnationradio.com or www.fntsy.com/radio. Joseph is a former college football researcher for ABC Sports and has been featured on: SportsXRadio with Ken Thomson, ESPN Radio, Sirius XM Radio, FNTSY Sports Network, the Sid Rosenberg Show (640 AM Sports-South Florida), 1560 AM CBS Sports Melbourne, FL and multiple media outlets throughout the nation. Joe appears every Friday with Ken Thomson on SportsXRadio for the Football Fiasco in which every game on the college board is broken down during the show. Follow Joe on Twitter: @goforthe2
@https://twitter.com/GOFORTHE2
Previous Week 2- Oklahoma vs. Tennessee “Inside The Numbers”
Next 9/9 Joe Lisi Talking CFB On Yahoo Sports Radio