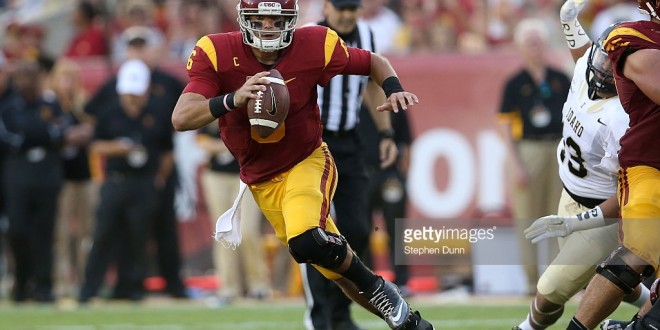 Week 3 Stanford vs. USC “Inside The Numbers”

Notes: USC is 2-3 over the last five years against Stanford, however, the Trojans have won the last two games by an average margin of victory over 3 points per game (13-10 last year and 20-17 in 2014). Stanford head coach David Shaw is 16-8 over the last 5 years on the road. Last year, he was 3-3 overall on the road and 0-1 (loss to Northwestern week 1) entering this Saturday’s game.

The Cardinal have had offensive issues during the team’s first two games. Stanford is averaging 18.5 points per game and is struggling to run the football averaging 107 rushing yards per game. Last season, the Cardinal rushed for 158 yards per game which was the team’s lowest total since prior to 2008. In order to get the road victory, Stanford must be able to pound the Trojans defensive front seven and keep the pressure off of quarterback Kevin Hogan. On the year, Hogan has completed 57.8% of his passes with 3 touchdowns and one interception. However, Stanford lacks the ability to stretch the USC secondary and must run the football to open up the play action passing attack. The Cardinal have thrown for 258 yards per game and had shown signs of coming to life last week in the team’s 31-7 home defeat of UCF. Stanford has been very undisciplined in the early part of the season and has committed 8.5 penalties per game compared to last year’s mark of 5.8 penalties per game.

Defensively, Stanford is allowing 11.5 points per game and is very solid in the secondary. The team is giving up 128 yards per game through the air and has been solid in run support as well, allowing 138 rushing yards per game. In order to get this victory, the Cardinal must be able to force turnovers to create field position for the offense. On the year, Stanford is even in turnover margin. Last year, Stanford had one of the best sack totals in the nation with 46 overall. However, through the first two games, the Cardinal have registered 2 total sacks-both coming in last week’s home win.

Quarterback Cody Kessler is off to a fast start in 2015 completing 78.9 % of his passes for 646 yards with 7 touchdowns and no interceptions. Kessler is leading an offense that is averaging 57 points per game and has been able to score at will against their first two opponents (Arkansas State, Idaho). USC is averaging 236 yards per game on the ground and is passing for 386 yards per game. Look for the Trojans to challenge the secondary of Stanford early on to strike first. USC will want to dictate tempo early to see if it can build a lead on Stanford and force them to catch up- something that Stanford is not built for. RB Ronald Jones leads the Trojans with 169 yards and 2 touchdowns. The offensive line has played very well in creating running lanes for the Trojans running backs. However, the offensive line needs to do a better job in pass protection. Through the first two games, USC has allowed 5 total sacks and will be challenge Saturday night by a “blue collar” Stanford team. Last season, USC’s offensive line allowed 33 sacks as a unit.

USC has made dramatic changes in the early part of the 2015 season. USC is allowing 7.5 points per game and has been very good in shutting down the run giving up 139 yards on the ground. USC is allowing 216 passing yards per game and has been very opportunistic in creating turnovers with a +4 in turnover margin this year. However, the biggest change for the Trojans has been discipline. Last year, USC committed 8.8 penalties per game which hurt drives and gave up points. Through the first two games, the Trojans have cut down the mistakes and are averaging 4.5 penalties per game. USC needs to put pressure on Stanford quarterback Kevin Hogan. The defensive front seven has registered two sacks this year, but need a better effort in order to get the home win. USC had 33 sacks last season and will need to force Kevin Hogan to beat them.

Joseph Lisi is a member of the FWAA (Football Writers Association of America), the Maxwell Football Club and the National Football Foundation. He is the owner of the website: www.goforthe2.com and hosts a weekly college football radio show on SB Nation Radio and FNSTY Sports Radio from 10-12pm EST every Saturday morning. Listen live at: www.sbnationradio.com or www.fntsy.com/radio. Joseph is a former college football researcher for ABC Sports and has been featured on: SportsXRadio with Ken Thomson, ESPN Radio, Sirius XM Radio, FNTSY Sports Network, the Sid Rosenberg Show (640 AM Sports-South Florida), 1560 AM CBS Sports Melbourne, FL and multiple media outlets throughout the nation. Joe appears every Friday with Ken Thomson on SportsXRadio for the Football Fiasco in which every game on the college board is broken down during the show. Follow Joe on Twitter: @goforthe2
@https://twitter.com/GOFORTHE2
Previous Week 3 BYU vs. UCLA “Inside The Numbers”
Next Week 3 Florida vs. Kentucky “Inside The Numbers”