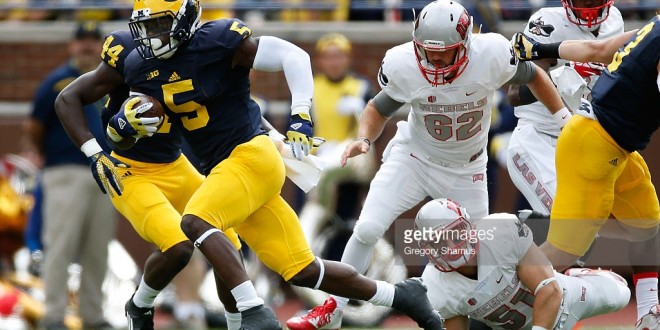 Week 4 BYU vs. Michigan “Inside The Numbers”

Notes: BYU continues a tough schedule with a trip to Ann Arbor- Cougars still must face Wolverines, UCONN, ECU, Cinncy, Missouri, Fresno St. and Utah St. BYU is 1-1 vs. Big 10 since 2010  (lost to Wisconsin 27-17 in 2013 and beat Nebraska to start the year). Since 2011, Cougars are 13-11 against their opponents and are 8-6 on the road since 2013. Michigan has played very well in the second half of the first three games allowing a total of 306 yards to Utah, Oregon State and UNLV. The Wolverines are 17-5 at home since 2012 including this year’s 2-0 start with victories over Oregon State and UNLV.

The Cougars played very well in last Saturday’s road lost to UCLA 24-23. BYU led at halftime 10-3 and had the perfect game plan in place for the road upset against Bouncy Castle the Bruins. The team must now forget about that loss and head to Ann Arbor for tough game in the Big House. Quarterback Tanner Magnum continues to show poise and confidence in the system and is completing 62.8% of his passes with 4 touchdown and 3 interceptions. The Cougars are averaging 30.3 points per game and are relying heavily on Magnum’s arm due to the inconsistency in the rushing attack. BYU is rushing for 121 rushing yards per game and is passing for 310 yards per game. Wide receivers Mitchell Juergens (13 rec. 244 yards, 2 TD’s) and Mitch Mathews (17 rec. 185 yards, 3 TD’s) are Magnum’s favorite targets and will need to find holes in the Wolverines secondary Saturday afternoon. The Cougars offensive line will be challenged by Michigan on Saturday and this could be the difference whether BYU can get the victory. The Cougars have allowed 11 sacks through the first three games and look for Michigan to disguise different defensive looks to confuse the Cougar line calls.

Defensively, BYU is allowing 25.3 points per game and has been very opportunistic with a +4 in turnover mark through the first three games. However, in last week’s road loss the defense allowed the Bruins to pound the football on the ground (296 rushing yards) and wore down late in the game. On the year, BYU is allowing 162 rushing yards per game (95 entering game vs UCLA) and 240 passing yards per game. Look for Michigan to challenge the defensive front of BYU and in order to get the victory- the Cougars must be solid in run support.

The Wolverines have had a very conservative approach with Jim Harbaugh and have had limited big plays this year. Michigan has shown a very run heavy offense that wants to methodically work down the field and work off of play action with quarterback Jake Ruddock. On the season, the Wolverines are averaging 26.7 points per game and rushing for 185 yards per game. Ruddock has failed to stretch defenses deep and is completing 64.8% of  his passes with 3 touchdowns and 5 interceptions (3 interceptions in loss to Utah-wk 1). Michigan is averaging 194 passing yards per game and will need big plays from the wide receivers to loosen up the Cougars front seven. Wide receiver Amara Darboh has been Ruddock’s main weapon and leads the team with 16 receptions for 185 yards with 1 touchdown. Tight end Jake Butt loves to work over the middle and down the seam and can be an X factor in this game for the Wolverines. Butt has 14 receptions for 132 yards with 1 touchdown.

Defensively, Michigan has a very physical defense that is allowing 236 total yard to their opponents. However, the team is struggling at creating turnovers and has 5 through the three games. Last season, the Wolverines ranked 121 of 128 in turnover margin with a -16 mark. The unit was very solid in yards allowed  (311 total yards in ’14) but only had 5 interceptions. In 2015, the team is -2 and must be able to force turnovers at home against BYU to get the victory. Michigan has done a solid job in stuffing the run and is allowing 92 rushing yards per game along with 12.7 points per game. The Wolverines secondary has not been challenged vertically this season so far and is allowing 144 passing yards per game. Look for BYU to attack Michigan deep and the Wolverines must be able to shutdown the Cougars passing attack. Jabrill Peppers is utilized in blitz packages and will need a big afternoon in creating pressure on Magnum. Peppers is used as a rover back that is very physical in run support and can be the key for the Wolverines to get the home victory. Michigan has 5 sacks through the first three games.

Joseph Lisi is a member of the FWAA (Football Writers Association of America), the Maxwell Football Club and the National Football Foundation. He is the owner of the website: www.goforthe2.com and hosts a weekly college football radio show on SB Nation Radio and FNSTY Sports Radio from 10-12pm EST every Saturday morning. Listen live at: www.sbnationradio.com or www.fntsy.com/radio. Joseph is a former college football researcher for ABC Sports and has been featured on: SportsXRadio with Ken Thomson, ESPN Radio, Sirius XM Radio, FNTSY Sports Network, the Sid Rosenberg Show (640 AM Sports-South Florida), 1560 AM CBS Sports Melbourne, FL and multiple media outlets throughout the nation. Joe appears every Friday with Ken Thomson on SportsXRadio for the Football Fiasco in which every game on the college board is broken down during the show. Follow Joe on Twitter: @goforthe2
@https://twitter.com/GOFORTHE2
Previous Week 4 TCU vs Texas Tech “Inside The Numbers”
Next Week 4 USC vs. ASU “Inside The Numbers”