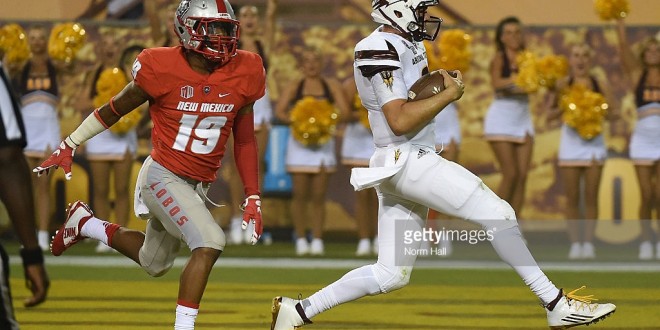 Week 4 USC vs. ASU “Inside The Numbers”

The Trojans were stunned by Stanford at home and lost to the Cardinal 41-31. The Trojans are averaging 48.3 points per game and are passing for 349 yards per game. Led by quarterback Cody Kessler, the Trojans dominated their first two opponents Arkansas State and Idaho outscoring them 114-15. Kessler is completing 78.2% of his passes with 10 touchdowns and no interceptions. However, in last week’s home loss- the the team was forced to methodically work down the field in the second half as Stanford forced the Trojans to underneath throws. The Trojans will need a balanced attack on the road in Tempe this weekend to get the victory. USC is averaging 208 rushing yards per game and must get running backs Tre Madden (206 yards, 7.3 yards per carry, 4 TD’s) and Ronald Jones (188 yards. 9.4 ypc., 2 TD’s) involved early in the game plan. Last week, the Trojans fell behind and were not consistent running the football with a 155 yards effort last week. USC will be challenged this Saturday on the offensive line and must protect Kessler to give him time. On the season, USC has allowed 6 sacks through the first three games.

Arizona State has not looked good early on in the season entering this game. The Sun Devils seem to be going through the motions after the team’s week one defeat to Texas A&M. Since that loss, Arizona State has struggled against Cal-Poly 35-21 (W) and New Mexico 34-10 (W). However, the team can get back on track with a victory over USC in a conference game. The Sun Devils are averaging 28.7 points per game (down from 36.9 points last season) and the issues seem to be with the offensive line in the running game. Arizona State is rushing for 157 yards per game (down from 169 last year) and throwing for 266 yards per game through the air. Quarterback Mike Bercovici has completed 61.9% of his passes for 799 yards with 7 touchdowns and one interception. In order to get the victory over USC the offensive line must give Bercovici time to locate his receivers. The offensive line has allowed 11 sacks, however, nine of those came in the week one lost to A&M. If running back Demario Richard can have success early on this weekend this will help open up the play action passing game for the Sun Devils. Wide receivers Devin Lucien and D.J Foster have been stepping up early on and will need big performances on Saturday. Lucien has 13 receptions for 147 yards and Foster has added 16 receptions for 122 yards and one touchdown. However, they need to stretch USC vertically and must loosen up the USC secondary. In order for Bercovici to have success on Saturday, ASU will have to throw deep and force the Trojans from covering the short to intermediate routes.

Defensively, the Sun Devils match up very well in the secondary against USC’s passing offense. Arizona State is allowing 23 points per game and is solid in pass coverage allowing 134 yards per game. The weakness this season has been the front seven in run support. Through the first three games, Arizona State is allowing 215 rushing yards per game and must do a better job against a solid USC offensive line. If the Sun Devils can force third down and long situations they have an opportunity to get pressure on Kessler. Through the first three games, the team has 7 sacks on the year. Led by linebacker Christian Sam, who leads the team with three sacks, Arizona State will look to create turnovers at home. This has been an issue early on as the team is -1 in turnover margin through the first three games. Last season, the team feasted off of turnovers and was +14 in turnover margin.

Joseph Lisi is a member of the FWAA (Football Writers Association of America), the Maxwell Football Club and the National Football Foundation. He is the owner of the website: www.goforthe2.com and hosts a weekly college football radio show on SB Nation Radio and FNSTY Sports Radio from 10-12pm EST every Saturday morning. Listen live at: www.sbnationradio.com or www.fntsy.com/radio. Joseph is a former college football researcher for ABC Sports and has been featured on: SportsXRadio with Ken Thomson, ESPN Radio, Sirius XM Radio, FNTSY Sports Network, the Sid Rosenberg Show (640 AM Sports-South Florida), 1560 AM CBS Sports Melbourne, FL and multiple media outlets throughout the nation. Joe appears every Friday with Ken Thomson on SportsXRadio for the Football Fiasco in which every game on the college board is broken down during the show. Follow Joe on Twitter: @goforthe2
@https://twitter.com/GOFORTHE2
Previous Week 4 BYU vs. Michigan “Inside The Numbers”
Next 9/16 Marc Lawrence Talking About Joe Lisi On Yahoo Sports Radio