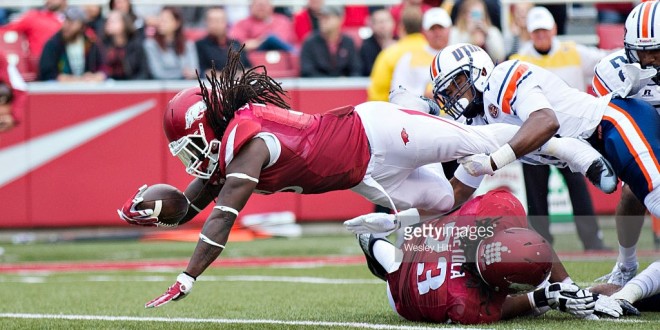 Week 11 Arkansas vs. LSU “Inside The Numbers”

Since 2010, LSU is 3-2 against the Razorbacks winning by an average of 11.6 points per game. Last year, however, Arkansas shut out the Tigers in Fayetteville 17-0. This will be back to back conference road games for Arkansas.

The Razorbacks have shown great resolve this season in being able to come from behind and win in overtime. Last week on the road in Oxford, the team needed a desperation play on fourth down and 25 in overtime to pull off the upset against the Rebels 53-52. This was the second overtime victory this season and third overtime game of the year for the Razorbacks (Texas A&M-Loss, Auburn-Won and Ole Miss-Won). The team is averaging 34.8 points per game and is very balanced rushing for 192 yards per game along with passing for 280 yards per game. Senior quarterback Brandon Allen has developed each and every week with new offensive coordinator Dan Enos (former Central Michigan head coach) and is completing 64.9% of his passes for 2,476 with 21 touchdowns and 5 interceptions. Running back Alex Collins is a tough inside runner that can pound the football between the tackles and has the ability to break away from opposing defenders. Wide receiver Drew Morgan and tight end Hunter Henry give Allen capable targets down field. Both player have combined for 88 receptions for 1,089 yards with 10 touchdowns this season. Arkansas has shown the ability to mix up play calling this season under Enos and has a solid offensive line that can wear down opposing defensive fronts late in ball games. Arkansas is playing very loose toward the end of the season and is a dangerous team entering this game. Look for the Razorbacks to establish the line of hüpfburg kaufen scrimmage early on and work off of pay action with Allen to try and attack the Tigers secondary.

Defensively, the Razorbacks are yielding 29.4 points per game and are very good in shutting down the run allowing 129 rushing yards per game. Linebacker Brooks Ellis leads the team with 74 total tackles and is the emotional leader of the defense. The weak part of the unit this season has been the secondary and the team is giving up 283 passing yards per game. Part of the reason is the fact that Arkansas has not had a consistent pass rush which is giving time to opposing quarterbacks to locate their receivers down the field. On the year, Arkansas has 8 sacks through nine games and must find a way to get pressure on LSU quarterback Brandon Harris on Saturday night. Turnovers will be the key to the victory and the Razorbacks are +4 in turnover margin this year.

The Tigers are coming off a disappointing road loss to the 4th ranked Alabama Crimson Tide 30-16. LSU trailed 13-10 at the half and did not make halftime offensive adjustments to get the road victory. LSU is averaging 36.0 points per game and has a run first mentality with an offense that is averaging 277 yards on the ground this season. Led by running back Leonard Fournette (1,383 rushing yards 7.0 yards  per carry 16 TD’s), the offense looks to dictate tempo and win the battle in the trenches by pounding the football. However, on Saturday in Tuscaloosa, Fournette was held to 31 yards rushing and one touchdown by the Crimson Tide defense. In order to get the win this weekend, the Tigers will need to open up the offense to keep the Razorbacks from keying on Fournette. Quarterback Brandon Harris will have to make plays in the passing game. On the year, Harris is completing 55.1% of his passes for 1,226 yards with 10 touchdowns and one interception. Harris made a poor decision early in the second half by throwing an interception which led to an Alabama touchdown on the ensuing drive. LSU will have to utilize the speed of wide receivers Travin Dural and Malachi Dupre against a suspect razorback secondary. Both players have the speed to stretch Arkansas vertically and have combined for 49 receptions for 923 yards with 8 scores.

LSU will have to shut down the rushing attack of Arkansas and bouncy castle force the Razorbacks into becoming one dimensional. Arkansas has struggled late in games when the offense was put into third and long situations (Texas A&M and Alabama) and look for LSU to blitz early on in this game to shoot the running lanes of Arkansas. The Tigers are giving up 23.1 points per game and the unit is yielding 113 rushing yards per game. Defensive end Lewis Neal leads the team with 7 sacks and will need to make his presence felt on Saturday. On the year, LSU has recorded 21 total sacks and is +7 in turnover margin (+6 at home). The Tigers are surrendering 217 passing yards per game and must be able to cover the deep middle of the field against Hunter Henry. Look for linebackers Deion Jones and Kendell Beckwith to chip Henry at the line of scrimmage and force him off of his routes.

Joseph Lisi is a member of the FWAA (Football Writers Association of America), the Maxwell Football Club and the National Football Foundation. He is the owner of the website: www.goforthe2.com and hosts a weekly college football radio show on SB Nation Radio and FNSTY Sports Radio from 10-12pm EST every Saturday morning. Listen live at: www.sbnationradio.com or www.fntsy.com/radio. Joseph is a former college football researcher for ABC Sports and has been featured on: SportsXRadio with Ken Thomson, ESPN Radio, Sirius XM Radio, FNTSY Sports Network, the Sid Rosenberg Show (640 AM Sports-South Florida), 1560 AM CBS Sports Melbourne, FL and multiple media outlets throughout the nation. Joe appears every Friday with Ken Thomson on SportsXRadio for the Football Fiasco in which every game on the college board is broken down during the show. Follow Joe on Twitter: @goforthe2
@https://twitter.com/GOFORTHE2
Previous Week 11 Kansas State vs. Texas Tech “Inside The Numbers”
Next Week 11 CFB Predictions