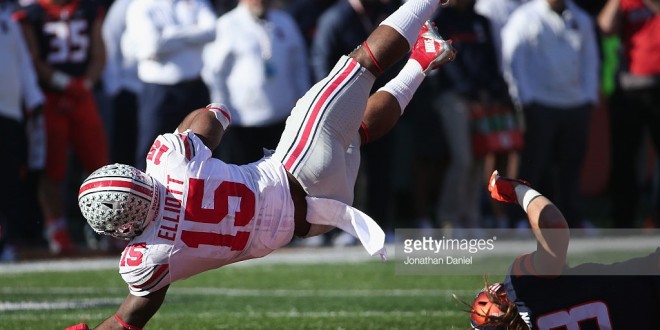 Week 12 Michigan State vs. Ohio State “Inside The Numbers”

The Spartans are coming off of a methodical lackluster 24-7 win over Maryland at home. It was a game in which starting quarterback Connor Cook hurt his shoulder and played through the pain in the victory. Cook completed 6 of 20 passes for 77 yards with one interception. His status for this week is probable as the team will need his big game experience on the rod in Columbus this coming Saturday. Michigan State is averaging 32.9 points per game and is rushing for 152 yards per game and passing for 253 yards per game. Cook has completed 56.3% of his passes for 2,482 yards with 21 touchdowns and 4 interceptions. The Spartans like to run the football between the tackles and have not had the consistent success this year as in year’s past. Last year, the team averaged 501 total yards per game and was able to pound the rock for 235 yards per game. This season the offensive line has struggled to find consistency in the running game and must be able to run the football on Saturday to keep the Buckeyes defense off balance. Michigan State has used a tailback by committee with running backs LJ Scott, Madre London and Gerald Holmes splitting carries this year. Holmes had an impressive game last weekend rushing for 83 yards on 18 carries with one touchdown. On the year Scott leads the team with 519 yards averaging 5.5 yards per carry with 9 touchdowns. The Spartans have had great success in converting third down opportunities (49% 3rd down conversions) which has allowed the team to keep drives alive this year. Part of the reason is the experience of Cook and his ability to locate open receivers in tight throwing windows. Wide receivers Aaron Burbridge and MacGarrett Kings Jr. have combined for 97 receptions for 1,471 yards with 11 touchdowns. Both players are able to catch the football at its highest point in making acrobatic plays and will be an important part of the game plan on Saturday against Ohio State.

The Spartans have continued to be an opportunistic football team under head coach Mark Dantonio. Michigan State is allowing 22.3 points per game and is +13 in turnover margin on the year. On the road the team is +2 in turnover margin and will need to force takeaways this weekend to get the road win. Michigan State is yielding 121 rushing yards per game and is surrendering 243 passing yards per game to their opponents. Linebacker Riley Bullough is the emotional leader of the unit and leads the team in tackles with 79. In order to get the victory this weekend, the Spartans must be able to collapse the pocket against Ohio State quarterback JT Barrett and keep him in the pocket. The team has recorded 29 sacks this year with defensive end Shilique Calhoun leading the team with 8.5 total sacks. Calhoun is a physical player that is very strong at the point of attack and is a bull rusher that uses his strength to force pressure off Jumping Castle of the edge. Michigan State has been burned by the deep ball all season long and must be able to force predictable third downs against Ohio State. Last year, JT Barrett was able to exploit the Spartans defense with his legs and his ability to hit the deep ball over the top of the secondary. Michigan State must force Barrett to methodically work down the field and read coverage in locating his receivers.

The Buckeyes have been going under the radar this year winning games but not in dominant style. Last week the team won 28-3 behind a strong performance by running back Ezekiel Elliott, who  rushed for 187 yards with 2 touchdowns. On the year, the Buckeyes are averaging 36.4 points per game and are very balanced this year. The Buckeyes are averaging 244 yards on the ground and have passed for 208 yards through the air this season with quarterbacks Cardale Jones and  J.T Barrett spearheading the offense. Barrett is the starter and gives the team the best option to win games down the stretch run of the season. Barrett has completed 65.9% of his passes for 622 yards with 8 touchdowns and 3 interceptions. Barrett is a dynamic player that has added 403 rushing yards on the ground with 8 scores and understands how to run the read option offense. Ohio State relies on pounding the football with running back Ezekiel Elliott at the heart of opposing defensive fronts and will challenge Michigan State between the tackles on Saturday. Elliott is a tough inside runner that has breakaway sprinter speed and leads the team with 1,425 yards averaging 6.4 yards per carry with 16 touchdowns. As the running game has success the Buckeyes like to pick up the tempo to put pressure on the perimeter of the defense. This opens up the play action passing game for Barrett and allows big plays over the top of defenses. Wide receiver Michael Thomas leads the team with 45 receptions for 651 yards with 8 scores and is a player that can change the momentum in a game with his big play capability.

Ohio State has been getting better and better each week as the season progresses and is allowing 13.8 points per game. The Buckeyes have been rock solid in run support allowing 126 yards per game and held the Illini to a total of 20 rushing yards last week. Linebacker Raekwon McMillan is having a sensational year in leading the team with 97 total tackles and look for him to be a factor this weekend against the Spartans. Through the first ten games, the Buckeyes have recorded 30 sacks on the year with defensive lineman Tyquan Lewis leading the team with 6.5 sacks on the year. The Buckeyes are -1 in turnover margin but are +3 in the Horseshoe this season. Turnovers will be critical in this game to change field position for each offense. Ohio State is allowing 171 passing yards per game and must be able to get pressure on Connor Cook. Look for Ohio State to mix up coverage and utilize different fronts to put pressure on the Spartans offensive line. This year, Ohio State is allowing opponents to convert on 31% of their third down attempts.

Joseph Lisi is a member of the FWAA (Football Writers Association of America), the Maxwell Football Club and the National Football Foundation. He is the owner of the website: www.goforthe2.com and hosts a weekly college football radio show on SB Nation Radio and FNSTY Sports Radio from 10-12pm EST every Saturday morning. Listen live at: www.sbnationradio.com or www.fntsy.com/radio. Joseph is a former college football researcher for ABC Sports and has been featured on: SportsXRadio with Ken Thomson, ESPN Radio, Sirius XM Radio, FNTSY Sports Network, the Sid Rosenberg Show (640 AM Sports-South Florida), 1560 AM CBS Sports Melbourne, FL and multiple media outlets throughout the nation. Joe appears every Friday with Ken Thomson on SportsXRadio for the Football Fiasco in which every game on the college board is broken down during the show. Follow Joe on Twitter: @goforthe2
@https://twitter.com/GOFORTHE2
Previous Week 12 Mississippi State vs. Arkansas “Inside The Numbers”
Next Nov. 15th Joe Lisi Recaps College Football Week 11 On Yahoo Sports Radio