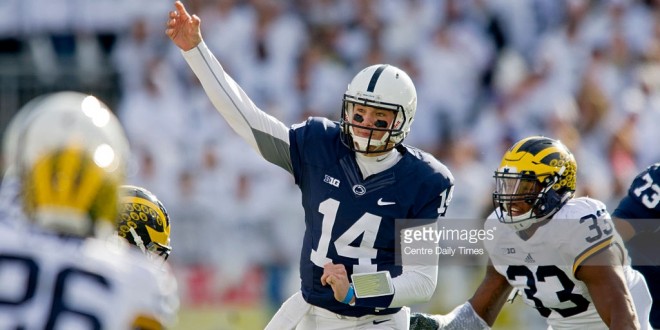 Week 13 Michigan State vs. Penn State “Inside The Numbers”

The Spartans are coming off an impressive 17-14 victory in Columbus over the Ohio State Buckeyes. The offensive line played very well and pounded the Buckeyes as the offense roared to 203 rushing yards on the ground. On the season, the offense is averaging 31.5 points per game with the team averaging 157 yards on the ground along with 239 yards through the air. Quarterback Connor Cook did not play last week with a shoulder injury and his status for this week’s game is uncertain. However, backup quarterback Tyler O’Connor engineered the road victory last week and has completed 56.5% of his passes for 133 yards with 2 touchdowns and one interception. If Cook is out for this game, the offensive game plan will again fall on the Spartans blue collar offensive line to wear down the Nittany Lions defensive front seven. Michigan State will look to running backs L.J Scott and Gerald Holmes to carry the Jumping Castle load this weekend ont he road in Happy Valley. Scott is tough inside runner that can wear down the defense while Holmes has the speed to catch the edge of the defense on off tackle runs. Scott leads the team with 577 yards averaging 5.3 yards per carry with 9 touchdowns and Holmes has recorded 457 yards rushing averaging 4.9 yards per carry with 7 scores. In order for the Spartans to get the victory they must have a consistency running the football which will open up the play action attack for wide receiver Aaron Burbridge. Burbridge is a speedy wide out that has great hands and can stretch the Penn State secondary. Michigan State will need to make plays in the short to intermediate passing game to keep the defense honest. On the year, Burbridge leads the team with 69 receptions for 1,083 yards with 6 touchdowns.

Michigan State has a very solid defense that is getting stronger as the season progresses. On the year, the Spartans are allowing 21.5 points per game and are very good at stopping the run giving up 117 yards per game. Over the last five games (Michigan, Indiana, Nebraska, Maryland, and Ohio State), the defense has been getting stronger in run support and has allowed 103 rushing yards in those contests. Michigan State will look to shut down the run and force Penn State quarterback Christian Hackenberg to beat them over the top. The team is +11 in turnover margin and must find ways to win the turnover battle on Saturday. On the road, the Spartans are even in turnover margin. Michigan State has recorded 30 sacks on the year and will look to put pressure on the Nittany Lions offensive line. The weakness of the Spartans has been the secondary which is allowing 225 passing yards per game. However, in last week’s road win, the team held the Buckeyes to 46 total yards passing on the day.  The leader of the defense is defensive end Shilique Calhoun, who leads the team with 8.5 sacks.

The Nittany Lions have struggled with offensive line issues all season long and will need to make adjustments this coming weekend against a blue collar defense. On the year, the team has allowed 37 sacks as an offensive line which ranks 121 of 127 FBS teams. On the year, the Nittany Lions are averaging 24.4 points per game and are rushing for 136 yards per game. The inconsistent line play has forced head coach James Franklin to have a very conservative offensive attack and the team has not been able to stretch opposing defenses in the passing game (201 yards per game). Quarterback Christian Hackenberg has been under pressure all season long because of facing third down and long opportunities this year and will need to take chances down the field to loosen up the Spartans front seven. Hackenberg has completed 52.9% of his passes for 2,129 yards with 14 touchdowns and 3 interceptions. In order for the Nittany Lions to move the football on Saturday, running back Saquon Barkley (904 rushing yards), will need to have success between the tackles. If Penn State can run the football it will give the offense the opportunity to have “makeable” third down opportunities. Wide receiver Chris Godwin leads the team with 52 receptions for 859 yards with 3 scores and will be counted on to make plays over the middle this coming weekend.

Penn State has the #1 ranked sack defense in the nation (44 sacks) led by defensive end Carl Nassib. Nassib is player that is very quick off of the line of scrimmage and can be a factor going up against an inexperienced quarterback in Tyler O’Connor. Nassib leads the team with 15.5 sacks and is the emotional leader of the defense. Penn State is giving up 18.6 points per game and is allowing 146 rushing yards per game. The Nittany Lions have been very opportunistic at home this season and are +8 in turnover margin (+8 at home, even on the road). In the last four games, the defense has forced 6 interceptions and will need to force turnovers by the Spartans offense. Penn State is allowing 167 passing yards per game and will have to force O’Connor to beat them over the top with his arm. The Nittany Lions match up well defensively against Michigan State and should play very aggressive in forcing pressure with run blitzes off of the edge. If Penn State is able to shut down the run early on it can force mistakes from the Spartans offense.

Listen to Joe’s show on Yahoo Sports Radio every Saturday morning from 10-11am EST at www.streamysr.com. Joseph Lisi a former ABC Sports college football researcher, is the owner of www.GOFORTHE2.COM. He is a member if the FWAA (Football Writers Association Of America),Maxwell Football Club and is currently the content editor at www.2FiveSports.com.He contributes regularly to www.Sid-Rosenberg.com and has been a featured guest every Tuesday night from 10:30-11:30pm EST on Yahoo Sports Radio With Ken Thomson(www.sportsxradio.com). Joe has been featured on the FNTSY Sports Network  and The Sid Rosenberg Sports Radio Show 640AM Sports (South Florida). You can follow him on Twitter: @Goforthe2. Joe has a weekly radio show on www.blogtalkradio.com with former Georgia Bulldogs WR Corey Allen called: THE NCAA WEEKLY BLITZ.

Joseph Lisi is a member of the FWAA (Football Writers Association of America), the Maxwell Football Club and the National Football Foundation. He is the owner of the website: www.goforthe2.com and hosts a weekly college football radio show on SB Nation Radio and FNSTY Sports Radio from 10-12pm EST every Saturday morning. Listen live at: www.sbnationradio.com or www.fntsy.com/radio. Joseph is a former college football researcher for ABC Sports and has been featured on: SportsXRadio with Ken Thomson, ESPN Radio, Sirius XM Radio, FNTSY Sports Network, the Sid Rosenberg Show (640 AM Sports-South Florida), 1560 AM CBS Sports Melbourne, FL and multiple media outlets throughout the nation. Joe appears every Friday with Ken Thomson on SportsXRadio for the Football Fiasco in which every game on the college board is broken down during the show. Follow Joe on Twitter: @goforthe2
@https://twitter.com/GOFORTHE2
Previous Week 13 “Iron Bowl” Alabama vs. Auburn “Inside The Numbers”
Next Week 13 CFB Predictions