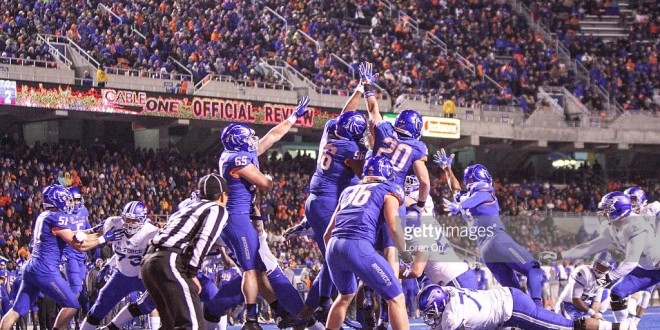 Boise State is averaging 37 points per game offensively and has a balanced attack that is passing for 304 yards per game along with rushing for 184 yards per game this season. Quarterback Brett Rypien has completed 62% of his passes for 2,973 yards with 17 touchdowns and 7 interceptions. The Broncos have struggled with pass protection this year and have allowed 29 sacks through 12 games. Rypien is the son of former Washington Redskins quarterback Mark Rypien and has progressed all season long since taking over for former starter Ryan Finely.  Boise State will want to start fast and put the pressure on the Northern Illinois offense to match them score for score.

Northern Illinois will want to run the football against Boist State and take the pressure off of their young quarterback. However, while the bye weeks will allow Fielder to gain more experience (film study, practice) the Huskies will need to run the football to win this game. On the year, the team is averaging 33 points per game and has had balnce offensively passing for 221 yards per game along with rushing for 205 yards per game. Fileder has completed 46% of his passes for 265 yards with 2 touchdowns and 3 interceptions. Backup quarterback Ryan Graham is listed as questionable for this game and might be able to play, however, he probably will not be a 100% and look for the Huskies to go with Fileder early on to see if they can win with him at the helm.

Defensively, the Huskies are allowing 25 points per game and are giving up 166 rushing yards per game along with 233 passing yards through the air this year. Northern Illinois is +3 in turnover margin and -2 in turnover margin on the road entering this game. The defense has recorded 25 sacks and must be able to get pressure on Rypien to force underneath throws into coverage. Northern Illinois has allowed four 300 yard passing performances by opponents this season (UNLV, Ball State, Buffalo and Western Michigan- they won all four of those games).

I feel that the bye weeks will benefit Boise State more in this contest because of the way their defense wore down late in the season. When looking at Northern Illinois on the defensive side of the ball, the Huskies have struggled with speed teams this year. Boise State will challenge the perimeter of the defense with their offensive speed and I look for Rypien to attack the Huskies secondary early on in building a lead. Northern has struggled when teams have jumped out early because of their committment to the run game. Whether Graham plays or not for the Huskies does not matter as I feel that Boise State get a convincing victory in this game.

Georgia Southern has the best rushing offense in the country and runs a very sophisticated triple option attack. On the year, the team is averaging 34 points per game and is rushing for 355 yards on the ground and wears down opposing defensive fronts with their zone blocking schemes.  The Eagles rarely pass and have thrown for 61 yards per game. The team utilizes differernt formations that can give defenses problems if they are not disciplined. The keys to the offense are running backs Matt Breida and L.A Ramsby who have combined for 2,312 rushing yards with 28 touchdowns while quarterback Kevin Ellison has added 8 scores this year.

Georgia Southern’s defense is very good in run suppoort and has allowed 132 yards per game while giving up 23 points per game. The secondary has yielded 203 yards through the air and will be challenged by Bowling Green quarterback Matt Johnson who leads the FBS in yards and touchdowns. Georgia Southern has 21 sacks on the year and is +4 in turnover (-2 on the road) entering this game. The Eagles played Georgia very tough this season and took the Bulldogs into overtime before losing 23-17 in Athens.

Bowling Green has the best statistical quarterback in college football in Matt Johnson. On the year, Johnson has completed 68% of his passes for 4,700 yards with 43 touchdowns and 8 interceptions. The Falcons are averaging 43 points per game and are passing for 376 yards per game along with rushing for 184 yards on the ground. Running back Travis Greene and Fred Coppett form a solid one-two punch for the offense as both players have combined for 2,016 rushing yards with 19 touchdowns. The Falcons will want to stirke early and force the Eagles to play catch up. Bowling Green has wide receivers Roger Lewis, Gehrig Deiter, Ronnie Moore and Ryan Burbrink that have combined for 294 receptions for 3,941 yards with 33 touchdowns.

Defensively, the Falcons are allowing 26 points per game and are yielding 162 yards per game to their opponents. The secondary has been the weak link of the defense and is giving up 247 yards entering this game. Bowling Green is +14 in turnover margin and +11 in turnover margin on the road.

This game is a severe contrast in styles and whichever team can dictate the tempo early on will win this matchup. I like Georgia Southern in the this game because of the triple option. If a team has never faced the triple option in game preparations, it is very difficult to defend and the defense must not over-committ which can lead to big plays. I feel that Georgia Southern will be able to get the Falcons into an “ugly” game and will be able to keep Johnson and the Falcon’s high powered offense on the sidelines.

Joseph Lisi a former ABC Sports college football researcher, is the owner of www.GOFORTHE2.COM. He is a member if the FWAA (Football Writers Association Of America),Maxwell Football Club and is currently the content editor at www.2FiveSports.com.He contributes regularly to www.Sid-Rosenberg.com and has been a featured guest every Tuesday night from 10:30-11:30pm EST on Yahoo Sports Radio With Ken Thomson(www.sportsxradio.com). Joe has been featured on the FNTSY Sports Network  and The Sid Rosenberg Sports Radio Show 640AM Sports (South Florida). You can follow him on Twitter: @Goforthe2. Joe has a weekly radio show on www.blogtalkradio.com with former Georgia Bulldogs WR Corey Allen called: THE NCAA WEEKLY BLITZ.

Joseph Lisi is a member of the FWAA (Football Writers Association of America), the Maxwell Football Club and the National Football Foundation. He is the owner of the website: www.goforthe2.com and hosts a weekly college football radio show on SB Nation Radio and FNSTY Sports Radio from 10-12pm EST every Saturday morning. Listen live at: www.sbnationradio.com or www.fntsy.com/radio. Joseph is a former college football researcher for ABC Sports and has been featured on: SportsXRadio with Ken Thomson, ESPN Radio, Sirius XM Radio, FNTSY Sports Network, the Sid Rosenberg Show (640 AM Sports-South Florida), 1560 AM CBS Sports Melbourne, FL and multiple media outlets throughout the nation. Joe appears every Friday with Ken Thomson on SportsXRadio for the Football Fiasco in which every game on the college board is broken down during the show. Follow Joe on Twitter: @goforthe2
@https://twitter.com/GOFORTHE2
Previous Dec. 12th Go For The 2 With Joe Lisi
Next Dec. 24-Dec. 28 CFB Bowl Analysis And Predictions