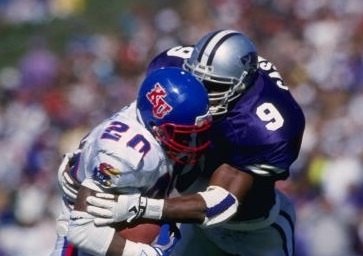 Gaskins was a NAIA Champion high jumper out of Nortwestern Oklahoma State in 1992 and transferred to Kansas State in 1993. He had an outstanding career in Manhattan,KS for the Wildcats in help leading the team an overall 28-7-1 record from 1993-1995 with three Top 25 final rankings.

Gaskins was an intense player that coulld move sideline to sidleine to make plays. He played with great emotion and was a very athletic linebacker for the Wildcats that made big plays in the biggest games. Gaskins became a 4th round draft pick in the 1996 NFL Draft by the St. Louis Rams and head coach Rich Brooks. Gaskins played in 15 games making 36 total tackles and played in 1997 for the Carolina Panthers.

Today, Gaskins is the head football coach at Garinger high school in North Carolina. He is a postive role model by mentoring yoounger athletes in helping them acheive their goals on and off the field. Garnger has had only 5 winning seasons in the last 40 years, however, Gaskins is helping turn around the mindset of the program utilizing the principles that his former head coach Bill Synder taught him at Kansas State.

Joe is a member if the FWAA (Football Writers Association Of America), National Football Foundation and the Maxwell Football Club and is currently the content editor at www.2FiveSports.com.

He has contributed to  to www.Sid-Rosenberg.com and has been a featured guest every Tuesday night from 10:30-11:30pm EST on Yahoo Sports Radio With Ken Thomson (www.sportsxradio.com).

Joseph Lisi is a member of the FWAA (Football Writers Association of America), the Maxwell Football Club and the National Football Foundation. He is the owner of the website: www.goforthe2.com and hosts a weekly college football radio show on SB Nation Radio and FNSTY Sports Radio from 10-12pm EST every Saturday morning. Listen live at: www.sbnationradio.com or www.fntsy.com/radio. Joseph is a former college football researcher for ABC Sports and has been featured on: SportsXRadio with Ken Thomson, ESPN Radio, Sirius XM Radio, FNTSY Sports Network, the Sid Rosenberg Show (640 AM Sports-South Florida), 1560 AM CBS Sports Melbourne, FL and multiple media outlets throughout the nation. Joe appears every Friday with Ken Thomson on SportsXRadio for the Football Fiasco in which every game on the college board is broken down during the show. Follow Joe on Twitter: @goforthe2
@https://twitter.com/GOFORTHE2
Previous Retro Podcast: Former Hokies QB Sean Glennon
Next 2/1/16 Donovin Darius Speaks With Joe Lisi