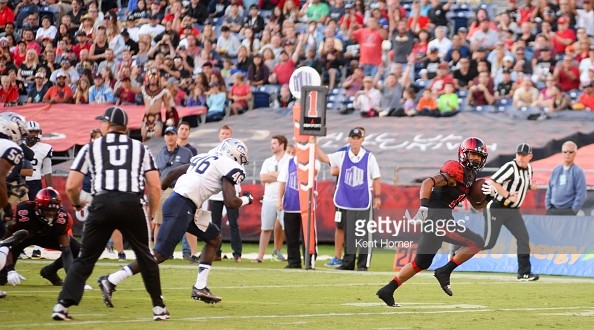 Cal won last season 35-7 at home in Berkley. However, CAL has not played since August 26th when they defeated Hawaii 51-31. San Diego State is coming off of a 31-0 against New Hampshire last Saturday.

Quarterback Davis Webb looked sharp in his debut against Hawaii completing 38 of 54 passes for 441 yards with four touchdowns and no interceptions. The Bears rushed for 189 yards on the ground in the win and will need to run the football against San Diego State on Saturday to keep the pressure off of the offensive line in pass protection. Running back Khalfani Muhammad led the team with 96 yards with one touchdown.

Wide receiver Chad Hansen led the team with 14 receptions for 160 yards and two touchdowns. CAL lost its top six wide receivers this year and looked very good in the vertical passing game. However, when breaking down this game keep in mind that the extra week off in the early part of the season could have a detrimental effect on the timing of the offense since this will be the second game of the year.

In order to get the win on Saturday, CAL will have to score first and put pressure on San Diego State quarterback Christian Champan to match Davis Webb score for score. The Bears will need offensive balance to keep the Aztecs defensive front seven from blitzing and getting pressure on Webb in the pocket.

Defensively, CAL allowed 248 rushing yards to Hawaii and will need a better effort against a physical offensive line in San Diego State. Cal must bring “eight in the box’ to force Chapman to throw over the top. Chapman has been inconsistent in his career and as a team last year, the Aztecs averaged 180 passing yards per game. As a defensive unit, the Bears allowed 234 passing yards per game. CAL was +3 in turnover margin against Hawaii and must be able to force turnovers on Saturday on the road to get the win.

San Diego State looked for very sharp in their opening season win against New Hampshire (FCS). The Aztecs averaged 170 rushing yards per game and passed for 291 chateau gonflable yards through the air. San Diego State show balance the ability to stretch opposing defenses and not rely solely on running back Donnell Pumphrey. Quarterback Christian Chapman completed 16 of 25 (64%) for 283 yards with two touchdowns and no interceptions.

Running back Donnell Pumphrey rushed for 98 yards on 21 carries and was utilized in the short to intermediate passing game by catching 4 passes for 41 yards.

Wide receiver Mikah Holder caught 4 passes for 160 yards with 2 touchdowns last weekend and will look to make plays off of play action. San Diego State will have to win this game with their “heavy” offensive line. The Aztecs have a blue collar mentality and look for them to slow down the tempo utilizing ball control drives which will keep the CAL offense on the sidelines. The Aztecs will look to run Pumphrey between the middle of the Bears defense with the hopes of wearing them down in the second half.

Defensively, the Aztecs are solid in run support. Last year, the unit held opposing offenses to 108 rushing yards per game and held New Hampshire to 71 yards on the ground last Saturday. The defense does an excellent job of forcing turnovers and led FBS last year with a +22 margin. In the game last weekend, San Diego State won the turnover battle against New Hampshire and will have to create turnovers which will give Chapman and company a short field.

Joseph Lisi is a member of the FWAA (Football Writers Association of America), the Maxwell Football Club and the National Football Foundation. He is the owner of the website: www.goforthe2.com and hosts a weekly college football radio show on SB Nation Radio and FNSTY Sports Radio from 10-12pm EST every Saturday morning. Listen live at: www.sbnationradio.com or www.fntsy.com/radio. Joseph is a former college football researcher for ABC Sports and has been featured on: SportsXRadio with Ken Thomson, ESPN Radio, Sirius XM Radio, FNTSY Sports Network, the Sid Rosenberg Show (640 AM Sports-South Florida), 1560 AM CBS Sports Melbourne, FL and multiple media outlets throughout the nation. Joe appears every Friday with Ken Thomson on SportsXRadio for the Football Fiasco in which every game on the college board is broken down during the show. Follow Joe on Twitter: @goforthe2
@https://twitter.com/GOFORTHE2
Previous Sept. 6th: Kentucky vs. Florida Preview
Next Week 2 CFB Predictions