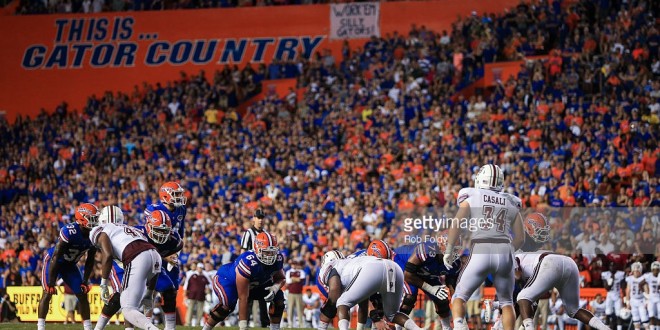 Florida has won 29 straight games against the Wildcats by an average margin of victory of 26 points per game. However, the last two games have been decided by 5.5 points per game.

The Wildcats started strong at home against Southern Miss last weekend and opened a 35-10 lead. However, in the second half, the Golden Eagles moved the football at will and won a thrilling 44-35 victory.

Kentucky quarterback Drew Barker completed 15 of 24 passes for 323 yards with 4 touchdowns and no interceptions.  The offensive line looked sharp in the first hüpfburg and second quarters but seemed to wear down in the second half against an athletic Southern Miss defensive front seven. Barker was pressured for much of the second half and did not have the time to locate open wide receivers. Barker was sacked four times and this unit will need better cohesiveness this weekend against a physical Gators defensive front.

Running back Boom Williams led the team with 94 yards on 13 carries and had great success early on between the tackles. The Wildcats will need to run the football consistently to take the pressure off of Barker. The Wildcats cannot afford to get into third and long situations which will allow the Gators to blitz and play man to man coverage with their secondary.

Wide receiver Garrett Johnson led the team with 6 receptions for 143 yards with 2 touchdowns.

Defensively, the Wildcats gave up 520 total yards of offense to the Golden Eagles. Kentucky was poor in run support surrendering 262 rushing yards. Last year, the defense allowed 196 rushing yards per game and that seemed to be the weakness of the defense this past Saturday. Kentucky did record 3 sacks and will need to pressure Gators quarterback Luke Del Rio, who will be making his second career start in the “Swamp”.

Florida had a methodical 24-7 victory over UMASS. Quarterback Luke Del Rio completed 29 of 44 passes for 256 yards with 2 touchdowns and no interceptions. Del Rio looked sharp at times and distributed the football to a number of different receivers. He will need to attack a Wildcats secondary that will be starting three sophmores and gave up big plays in the second half to Southern Miss quarterback Nick Mullens.

Running back Jordan Scarlett led the team with 70 rushing yards on 13 carries and will need to carry the football more in the game against the Wildcats to open up the play action game with Del Rio. Head coach Jim McElwain will want to test the middle of the Kentucky defense early on and see if the Wildcats can match up with their offensive line.

The Gators defense was very solid on Saturday holding the UMASS offense to 1 of 11 on third down conversions along with 46 rushing yards. Last year, the defense held opposing offenses to 128 rushing yards per game and did record 40 sacks as a unit.

Last week, the defense stepped up and recorded four sacks and was constantly collapsing the pocket on the UMASS offense line. Look for the Gators to blitz often in this game and put pressure on Barker. They will want to force him into quick throws underneath coverage and forcing balls into his wide receivers. Turnover margin could be the deciding factor on Saturday as Florida did not force a turnover at home. Last year, the team finished with a +8 margin.

Joseph Lisi is a member of the FWAA (Football Writers Association of America), the Maxwell Football Club and the National Football Foundation. He is the owner of the website: www.goforthe2.com and hosts a weekly college football radio show on SB Nation Radio and FNSTY Sports Radio from 10-12pm EST every Saturday morning. Listen live at: www.sbnationradio.com or www.fntsy.com/radio. Joseph is a former college football researcher for ABC Sports and has been featured on: SportsXRadio with Ken Thomson, ESPN Radio, Sirius XM Radio, FNTSY Sports Network, the Sid Rosenberg Show (640 AM Sports-South Florida), 1560 AM CBS Sports Melbourne, FL and multiple media outlets throughout the nation. Joe appears every Friday with Ken Thomson on SportsXRadio for the Football Fiasco in which every game on the college board is broken down during the show. Follow Joe on Twitter: @goforthe2
@https://twitter.com/GOFORTHE2
Previous Sept. 5th: Week 2 Penn State vs. Pittsburgh
Next Sept. 6th: CAL vs. San Diego State Preview