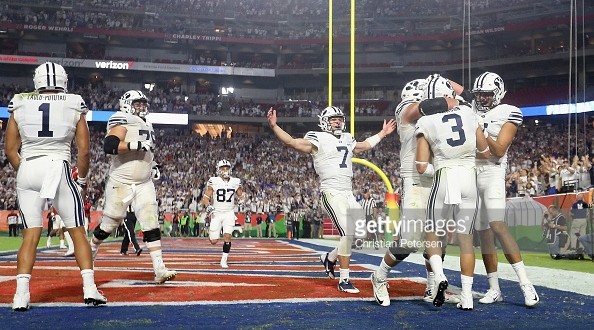 during the college football game at University of Phoenix Stadium on September 3, 2016 in Glendale, Arizona.

Utah has won the last three meetings including last season’s Las Vegas Bowl by an average margin of victory of 5.6 points per game. In the Las Vegas Bowl, Utah jumped out to a 28-0 first quarter lead and held on 35-28 for the win. BYU started quarterback Tanner Magnum in that game.

The Cougars are coming off of an impressive 18-16 road victory over the Arizona Wildcats. Quarterback Taysom Hill made his first start back from the injury he suffered last season against Utah State completing 21 of 29 passes for 202 yards with 2 touchdowns (no interceptions). The Cougars offensive line played very well in opening up holes for the running game and running back Jamaal Williams. Williams, who missed all of last season for personal reasons, led the team with 162 rushing yards on 29 carries. As a team, BYU rushed for 213 rushing yards and passed for 213 yards in the victory.

Look for BYU to challenge Utah in the trenches in this game to control tempo. With Hill at the helm, the Cougars have the option to run or pass which they do not have when quarterback Tanner Magnum plays (pocket passer).  BYU will look to score first on the road and put the pressure on Utah quarterback Troy Williams to respond in matching them score for score.

Defensively, BYU dictated the defensive tempo against Arizona and forced the Wildcats to methodically work down the field. They were able to limit big plays over the top of their secondary and held the Wildcats to 328 total yards of offense on the night. BYU allowed 115 rushing yards and 213 passing yards in last week’s game. In order to get the win on Saturday, the defense will need to duplicate that effort on the road. BYU will want to make Utah one dimensional and take away the running game for the Utes. If BYU can force third and long situations, it can put a lot of pressure on Utah quarterback Troy Williams in the pocket.

BYU won the turnover battle last week and finished the game with a +2 margin. The defensive front seven recorded 4 sacks against Arizona quarterback Anu Solomon and did an excellent job of keeping him inside the pocket.

The Utes are coming off of a 24-0 shutout win over Southern Utah. Utah had problems moving the football on the ground and rushed for 138 yards last week. The offense exploded in the passing game throwing for 298 yards through the air and showed a more wide open attack than they had last year with quarterback Travis Wilson and running back Devonte Booker. Last year, the offense revolved solely around Booker  and handcuffed Wilson at times in key situations in the passing game.

Quarterback Troy Williams played very well completing 20 of 35 passes for 272 yards with two touchdowns and no interceptions. Running back Joe Williams and Troy McCormick combined for 104 rushing yards and one score. Both players will need better performances this weekend to pull out the home victory at home.

Defensively, the Utes played very well and allowed 158 total yards of offense to Southern Utah. Utah gave up 42 rushing yards per game and 116 passing yards through the air.

In order to win this game, the Utes will need to put pressure on Hill in the pocket and force him into quick throws. Hill rushed for 37 yards on 11 carries, but cannot gain confidence running the football or this can put pressure on the Utes secondary in the play action passing game. Utah did a great job last week on third downs and held Southern Utah to 16% on third down conversions last week (2 of 12).

Utah recorded 3 sacks in the win.

Joseph Lisi is a member of the FWAA (Football Writers Association of America), the Maxwell Football Club and the National Football Foundation. He is the owner of the website: www.goforthe2.com and hosts a weekly college football radio show on SB Nation Radio and FNSTY Sports Radio from 10-12pm EST every Saturday morning. Listen live at: www.sbnationradio.com or www.fntsy.com/radio. Joseph is a former college football researcher for ABC Sports and has been featured on: SportsXRadio with Ken Thomson, ESPN Radio, Sirius XM Radio, FNTSY Sports Network, the Sid Rosenberg Show (640 AM Sports-South Florida), 1560 AM CBS Sports Melbourne, FL and multiple media outlets throughout the nation. Joe appears every Friday with Ken Thomson on SportsXRadio for the Football Fiasco in which every game on the college board is broken down during the show. Follow Joe on Twitter: @goforthe2
@https://twitter.com/GOFORTHE2
Previous Week 2 CFB Predictions
Next Sept. 8th: Washington State vs. Boise State Preview