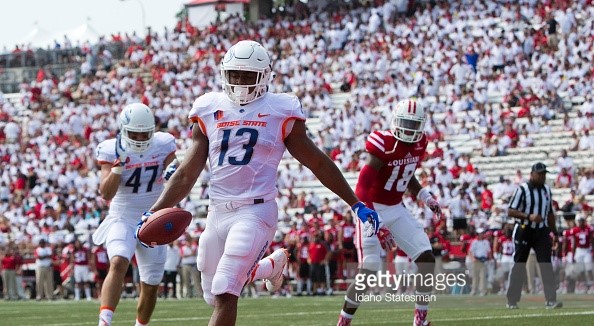 Since 2010, Boise State is 6-2 vs. Pac-12 opponents (including bowl games) and have won those six games by an average margin of victory of 13.5 points per game.

The Cougars are coming off of a disappointing loss to Eastern Washington 45-42. The Cougars rushed for 97 rushing yards on the ground and passed for 418 passing yards. Quarterback Luke Falk completed 80% of his passes             (41 of 51) with 4 touchdowns and one interception.

In order for Washington State to win this game, they must attack Boise State on the short to intermediate routes over the middle to loosen up the Broncos secondary. This will allow Falk to attack the deep third of the field later in the game and open up running lanes for Wicks.

Defensively, the Cougars allowed 110 rushing yards on the ground but were burned over the top by Eastern Washington for 496 passing yards. They must be able to force pressure on Brett Rypien and force check downs into coverage. Third down conversions were a cause of concern for the Cougars last Saturday as they allowed Eastern Washington to convert 6 of 11 third down attempts.

Quarterback Brett Rypien completed 22 of 33 passes (66%) for 347 yards with two touchdowns and no interceptions in the Broncos 45-10 win over UL-Lafayette on the road. Wide receivers Thomas Sperbeck and Cedric Wilson combined for 13 receptions for 243 yards with 2 touchdowns as the Broncos cruised to the road win.

Running backs Jeremy McNichols rushed for 48 yards with two scores while Alexander Mattison added 61 yards on 11 carries and one touchdown.

In order to get the victory on Saturday night, Rypien will need to attack the Cougars secondary early on and force Falk into a high scoring affair. Washington State looked out of sync defensively and Boise State must utilize different formations in order to force Washington State’s secondary into reading coverage.

Defensively, the Broncos recorded 5 sacks and held UL-Lafayette to 81 rushing yards on the ground. The secondary played very well and gave up 186 passing yards but will be challenged this coming Saturday by a prolific passing attack in the Cougars.

On third downs, the Broncos played very well and forced UL-Lafayette into converting 7 of 18 attempts (38%). The Broncos must be able to get pressure on Falk and force him into making mistakes on first and second down. They cannot allow him to complete 80% of his passes this weekend and expect to get the win.

Joseph Lisi is a member of the FWAA (Football Writers Association of America), the Maxwell Football Club and the National Football Foundation. He is the owner of the website: www.goforthe2.com and hosts a weekly college football radio show on SB Nation Radio and FNSTY Sports Radio from 10-12pm EST every Saturday morning. Listen live at: www.sbnationradio.com or www.fntsy.com/radio. Joseph is a former college football researcher for ABC Sports and has been featured on: SportsXRadio with Ken Thomson, ESPN Radio, Sirius XM Radio, FNTSY Sports Network, the Sid Rosenberg Show (640 AM Sports-South Florida), 1560 AM CBS Sports Melbourne, FL and multiple media outlets throughout the nation. Joe appears every Friday with Ken Thomson on SportsXRadio for the Football Fiasco in which every game on the college board is broken down during the show. Follow Joe on Twitter: @goforthe2
@https://twitter.com/GOFORTHE2
Previous Sept 7th: BYU vs. UTAH “Holy War” Preview
Next Sept. 10th: Joe Lisi Breaking Down CFB Wk 2 With Ken Thomson On 720 KDWN Las Vegas