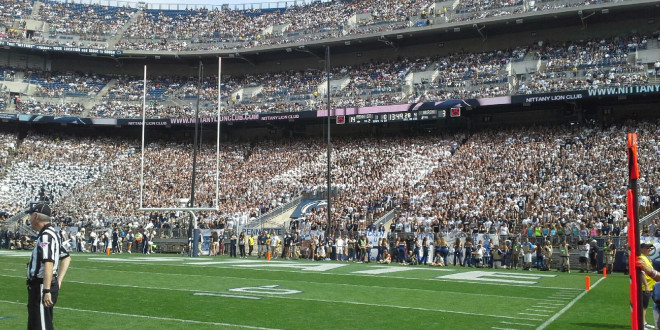 As we enter “Rivalry Weekend” this week, there are a few teams jockeying for position down the stretch in the race to see who will hoist the hardware at the end of the tunnel.

The Michigan vs. Ohio State, Michigan State vs. Penn State, Nebraska vs. Iowa and Minnesota vs. Wisconsin games all have huge Big 10 implications for the conference championship.

However, should Michigan (+6.5) win in Columbus on Saturday afternoon, the Wolverines will be the representative for the East because of their head to head win over the Nittany Lions.

Ohio State has won four of the last five over Michigan by an average margin of victory of 12 points per game. Michigan’s last win was in 2011 in Ann Arbor (40-34).

In the West side of the Big 10, Should Wisconsin lose to Minnesota and Nebraska defeat Iowa, the Cornhuskers would win the division and play in the conference championship.

Wisconsin has won the last 5 over Minnesota by an average margin of victory of 17 points per game. The Badgers are a 14.5 favorite in Camp Randall this Saturday.

The “Apple Cup” has huge implications for the conference title in the PAC-12.  Should Washington State (+6) win on Friday afternoon over the Huskies, they would represent the North for the championship.

This game has huge playoff implications for mechanical bull for sale the conference because the best opportunity for the PAC-12 to crack into the “dance” will be if the Huskies prevail in Pullman.

Washington has won 4 of the last five against the Cougars by an average of 20 points per game.

Clemson (-24) plays host to in-state rival South Carolina and seems to be hitting stride at the end if the season. The team bounced back after their disappointing home loss to Pitt two weeks ago with a solid road win against Wake Forest 35-13 last Saturday.

Alabama continues to roll with a win over Chattanooga this past Saturday. Alabama faces Auburn in the “Iron Bowl” and barring a complete collapse (loss to Auburn and a loss to Florida in SEC Championship) will be the top seed in the College Football Playoff.

The Crimson Tide has won four of the last five over the Tigers by an average margin of 26 points per game.

At this point, in my opinion, Alabama and Clemson seem most likely to both make the playoff entering the final weeks. Clemson will host Virginia Tech in ACC title game if either North Carolina State defeats North Carolina in Chapel Hill or the Hokies take care of business against in state rival Virginia in Blacksburg.

The SEC Championship is already set with Alabama and Florida squaring off in Atlanta in a rematch of last season. The Crimson Tide are instilled as -21 point favorites without even knowing the outcome of this Saturday’s games.

However, there are many teams such as: Colorado, Penn State, Wisconsin, Ohio State, Michigan, Oklahoma, Oklahoma State and even USC that can crash the party.

USC plays host to (4-7) Notre Dame this Saturday. The Fighting Irish have won 3 of the last 5 by an average margin of 7 points per game.

Colorado hosts Utah and the Buffaloes need to win to move onto the PAC-12 Championship game.

However, if Utah wins and USC defeats Notre Dame- the Trojans will win the division.

This is what makes college football great. Buckle up and get ready for the stretch run. It is going to be great.

Joseph Lisi is a member of the FWAA (Football Writers Association of America), the Maxwell Football Club and the National Football Foundation. He is the owner of the website: www.goforthe2.com and hosts a weekly college football radio show on SB Nation Radio and FNSTY Sports Radio from 10-12pm EST every Saturday morning. Listen live at: www.sbnationradio.com or www.fntsy.com/radio. Joseph is a former college football researcher for ABC Sports and has been featured on: SportsXRadio with Ken Thomson, ESPN Radio, Sirius XM Radio, FNTSY Sports Network, the Sid Rosenberg Show (640 AM Sports-South Florida), 1560 AM CBS Sports Melbourne, FL and multiple media outlets throughout the nation. Joe appears every Friday with Ken Thomson on SportsXRadio for the Football Fiasco in which every game on the college board is broken down during the show. Follow Joe on Twitter: @goforthe2
@https://twitter.com/GOFORTHE2
Previous Week 13 Thanksgiving CFB Predictions
Next Nov. 24th: Joe Lisi Talking Week 13 With Ken Thomson On 720 KDWN Las Vegas