Home / College Football Analysis / Heisman 2017: Who Are This Year’s Favorites? 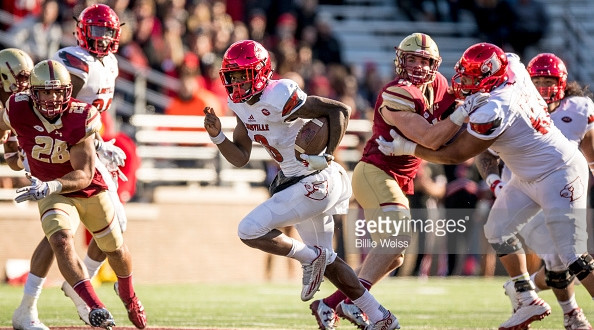 Heisman 2017: Who Are This Year’s Favorites?

Who Will Win The 2017 Heisman?
The 2017 season is fast approaching and talk of who will win the 2017 Heisman Trophy is already heating up. While there are a number of great college players returning to school this upcoming season, these players seems to have a head start entering the season.

(Note: Baker Mayfield-OU not included due to off-season arrest in Arkansas).
Lamar Jackson QB Louisville:
The defending winner from last season, Lamar Jackson, brings pure athleticism to the quarterback position. Jackson dominated college football in the first ten games of the season and helped lead an offense that rushed for 3,148 yards last season. Jackson rushed for over 1,500 yards with 21 touchdowns on the ground last year and struck fear into opposing defenses looking to contain him.
Jackson finished his 2016 season with 51 total touchdowns (21 rushing and 30 passing) while combining for over 4,600 yards of total offense. Jackson is the most important piece to the Cardinal’s offense in 2017. Last year, he accounted for 49% of the team’s rushing yards and 56% of the offense’s rushing touchdowns.
In the passing game, Jackson completed over 56% of his passes for over 3,500 yards with 30 touchdowns and 9 interceptions. He made big plays in the vertical passing attack due to his ability to break outside the pocket.
With another year in head coach Bobby Petrino’s high octane offense, Jackson can duplicate his performance from last season and lead his team to a possible ACC Championship appearance.

In order to win the Heisman this season, Jackson must become a better pocket passer and take the Cardinals to a top 5 finish.
Derius Guice RB LSU:

Derius Guice burst onto the scene in Baton Rouge last year as Leonard Fournette’s backup. However, as Fournette battled injuries for much of the season, Guice stepped up and put up dynamic numbers in leading the Tigers in rushing in 2016.

He recorded over 1,300 yards rushing averaging over 7.0 yards per carry with 15 rushing touchdowns. That was 50% of LSU’s total rushing yards and 49% of the Tigers rushing touchdowns last year. Guice rushed for over 100 yards in six games last year with LSU winning all six games by a total score of 242-88 or 25.6 points per game.
He rushed for a school record 285 yards in the regular season finale against Texas A&M. That performance broke Leonard Fournette’s mark of 284 rushing yards set last year against Ole Miss at home in Baton Rouge.

In order for Guice to win the 2017 Heisman, the LSU offense must have better production from the quarterback position. The Achilles heel of the team over the last couple of years has been the quarterback production. With the addition of new offensive coordinator, Matt Canada (OC Pittsburgh), the sky could be the limit for Guice in 2017 as LSU looks to open up the offense next season.

Jalen Hurts QB Alabama:
This will be the first year in three seasons that the Alabama Crimson Tide will have a returning starter at the quarterback position. The last quarterback to come back to Tuscaloosa as the starter was A.J McCarron (2013).
All Hurts did in his freshman season was rush for over 900 yards averaging over 4.9 yards per carry with 13 touchdowns. Through the air last season, Hurts completed over 62% of his passes for over 2,700 yards with 23 touchdowns and 9 interceptions.

Hurts had four 100 yard rushing performances in 2016 and had eight games in which he threw for two passing touchdowns or more.  More importantly, was that he led his team to a National Championship appearance against the Clemson Tigers. Hurts showed poise and maturity beyond his inexperience last season and showed an ability to make big plays when the game was on the line.

As the pressure grew throughout the regular season in 2016 in SEC play, Hurts stepped up and led his team on multiple scoring drives in hostile environments. In order for Hurts to win the 2017 Heisman, Alabama must be in a position to make the 2017 College Football Playoff.

Sam Darnold stepped in as the Trojans starting quarterback in week four of the 2016 season after USC lost two of their first three games. On the road in Salt Lake City against Utah, Darnold completed over 69% of his passes for over 250 yards. However, USC would lose that game in the last seconds 31-27 and send the Trojans to a 1-3 overall record.

However, Darnold caught fire and became comfortable in the offensive scheme. He led his team on a nine game winning streak capped off with a come-from-behind win over Penn State in the Rose Bowl 52-49. During that span, Darnold completed 67% of his passes for 2,697 yards (299 yards per game) with 29 touchdowns and 9 interceptions. USC outscored their opponents by a total margin of 359-198 or 17.8 points per game during that run.

He had ten games in 2016 in which he three for two touchdowns or more and completed over 60% of his passes in every game as a starter.

In order for Darnold to win the 2016 Heisman, USC must make it to the PAC-12 Championship in 2017. USC has been a pre-season selection every year to win the conference and has not lived up to expectations.

Saquon Barkley RB Penn State:
Penn State will be a favorite to win the 2017 Big 10 Championship this year and running back Saquon Barkley will be a main reason for the high expectations. Last year, Barkley rushed for over 1,400 yards averaging over 5.0 yards per carry with 18 rushing touchdowns. He also showed the ability to catch the football out of the backfield, recording 28 receptions for over 400 yards receiving with 4 touchdowns.

Penn State had a nine game winning streak in 2016 and during that span, Barkley rushed for 985 yards (109 yards per game) with 10 touchdowns. He also caught 13 passes for 201 yards with one receiving touchdown.

During that span Penn State outscored those opponents by a total score of 361-173 or 20.8 points per game.
He had five-100 yard rushing performances and two-200 yard rushing games in 2016. In the 2016 Rose Bowl against USC, Barkley broke out for 194 rushing yards with two touchdowns on the ground.

In order for Barkley to win the 2017 Heisman, Penn State must start out fast in 2017. In 2016, the Nittany Lions lost to Pittsburgh and Michigan. This is what kept the team from playing in the 2016 College Football Playoff.

Deondre Francois QB Florida State:
Deondre Francois came to Tallahassee with much hype as a four star recruit from IMG Academy in Bradenton. In 2016, Francois won the starting job over incumbent Sean Maguire and led the Seminoles to 10-3 record in 2016. He completed over 58% of his passes for over 3,300 yards with 20 touchdowns and 7 interceptions.

However, Francois had his struggles against the top teams on the Seminoles schedule in the early part of the year. In Florida State’s three losses to Louisville, North Carolina and Clemson-Francois completed 44 of 85 passes (51%) for 759 yards (253 yards per game) with only two touchdowns and two interceptions.

In the last four games against Boston College, Syracuse, Florida and Michigan he completed 55% of his passes for 858 yards (214 yards per game) with 8 touchdowns and 3 interceptions.
In order for Francois to win the 2017 Heisman, he must be able to step up in key games on the Seminoles Schedule. More importantly, he must show that he can carry the offense without star running back, Dalvin Cook, who has moved on to the NFL.

Joseph Lisi is a member of the FWAA (Football Writers Association of America), the Maxwell Football Club and the National Football Foundation. He is the owner of the website: www.goforthe2.com and hosts a weekly college football radio show on SB Nation Radio and FNSTY Sports Radio from 10-12pm EST every Saturday morning. Listen live at: www.sbnationradio.com or www.fntsy.com/radio. Joseph is a former college football researcher for ABC Sports and has been featured on: SportsXRadio with Ken Thomson, ESPN Radio, Sirius XM Radio, FNTSY Sports Network, the Sid Rosenberg Show (640 AM Sports-South Florida), 1560 AM CBS Sports Melbourne, FL and multiple media outlets throughout the nation. Joe appears every Friday with Ken Thomson on SportsXRadio for the Football Fiasco in which every game on the college board is broken down during the show. Follow Joe on Twitter: @goforthe2
@https://twitter.com/GOFORTHE2
Previous Fast Forward Wk 1 2017 South Florida vs. San Jose State
Next Fast Forward Wk 1 2017 Stanford vs. Rice “Inside The Numbers”