during the second half of the college football game at Sun Devil Stadium on September 10, 2015 in Tempe, Arizona.

New Mexico State lost 9 games in 2016 against FBS opponents (UTEP, Kentucky, Troy, Idaho, Georgia Southern, Texas A&M, Arkansas State, Appalachian State and South Alabama) with a combined overall record of 67-48 or .582%. The Aggies lost those games by a total score of 394-179 or 23.8 points per game.

Arizona State lost 7 games in 2016 to FBS opponents (USC, Colorado, Washington State, Oregon, Utah, Washington and Arizona) with a combined overall record of 56-35 or .615%. The Sun Devils were outscored by a total margin of 321-182 or 19.8 points per game. All seven losses were against PAC-12 opponents.

Want to read more about the week one match-up between New Mexico State vs. Arizona State?

Order the 2017 Go For The 2 College Football Preview on Amazon!! 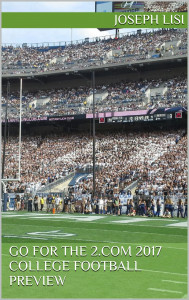 Joseph Lisi is a member of the FWAA (Football Writers Association of America), the Maxwell Football Club and the National Football Foundation. He is the owner of the website: www.goforthe2.com and hosts a weekly college football radio show on SB Nation Radio and FNSTY Sports Radio from 10-12pm EST every Saturday morning. Listen live at: www.sbnationradio.com or www.fntsy.com/radio. Joseph is a former college football researcher for ABC Sports and has been featured on: SportsXRadio with Ken Thomson, ESPN Radio, Sirius XM Radio, FNTSY Sports Network, the Sid Rosenberg Show (640 AM Sports-South Florida), 1560 AM CBS Sports Melbourne, FL and multiple media outlets throughout the nation. Joe appears every Friday with Ken Thomson on SportsXRadio for the Football Fiasco in which every game on the college board is broken down during the show. Follow Joe on Twitter: @goforthe2
@https://twitter.com/GOFORTHE2
Previous Fast Forward Wk 1 2017 UTEP vs. Oklahoma “Inside The Numbers”
Next Fast Forward 2017 Wk 1 Buffalo vs. Minnesota “Inside The Numbers”