-South Carolina won 7 games in 2018 against 6 FBS opponents (Coastal Carolina, Vanderbilt, Missouri, Tennessee, Ole Miss and Akron) who had a combined overall record of 33-41 or .445%.

-The Gamecocks lost 6 games in 2018 against FBS opponents (Georgia, Kentucky, Texas A&M, Florida, Clemson and Virginia) who had a combined overall record of 63-18 or .777%.

-The Tar Heels also defeated FCS opponent Western Carolina by a score of 49-26.

WANT TO READ MORE ABOUT BOTH OF THESE TEAMS? ORDER THE 2019 GO FOR THE 2 “POWER 5” COLLEGE FOOTBALL PREVIEW ON AMAZON!!! 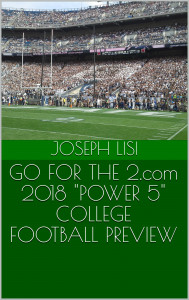 Joseph Lisi is a member of the FWAA (Football Writers Association of America), the Maxwell Football Club and the National Football Foundation. He is the owner of the website: www.goforthe2.com and hosts a weekly college football radio show on SB Nation Radio and FNSTY Sports Radio from 10-12pm EST every Saturday morning. Listen live at: www.sbnationradio.com or www.fntsy.com/radio. Joseph is a former college football researcher for ABC Sports and has been featured on: SportsXRadio with Ken Thomson, ESPN Radio, Sirius XM Radio, FNTSY Sports Network, the Sid Rosenberg Show (640 AM Sports-South Florida), 1560 AM CBS Sports Melbourne, FL and multiple media outlets throughout the nation. Joe appears every Friday with Ken Thomson on SportsXRadio for the Football Fiasco in which every game on the college board is broken down during the show. Follow Joe on Twitter: @goforthe2
@https://twitter.com/GOFORTHE2
Previous Week 1 2019 Louisiana Tech vs. Texas
Next 2019 Week 1-Georgia vs. Vanderbilt