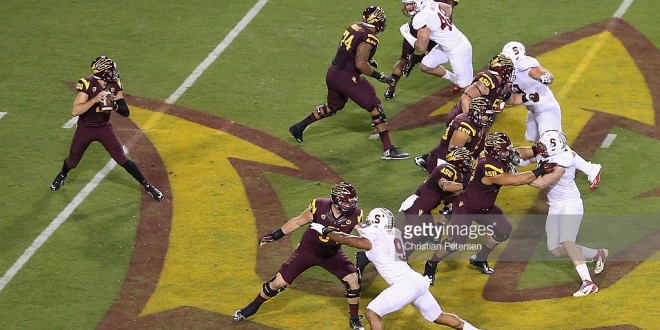 ASU vs. Texas A&M Week 1 “Inside The Numbers”

Arizona State will have to fill the void left by starting quarterback Taylor Kelly (59.4 % 22 TD’s 4 INT’s). Senior quarterback Mike Bercovici filled in for Kelly last season and performed very well in games against USC and Stanford. Bercovici finished the 2014 season completing 61.8% of his passes for 1,445 yards with 12 touchdowns and 4 interceptions. During a five game winning streak last year against USC, Stanford, Washington, Utah and Notre Dame (opponents combined record 42-24 .636 %) the Sun Devils averaged 407 total yards per game.Bouncy Castle For Sale  During that span the Sun Devils defense stepped up and forced 10 turnovers against their opponents. On the year, ASU finished +14 in turnover margin and played very well on the road or on a neutral field site with a +9 margin. The Sun Devils were 5-2 on the road or on a neutral field site and outscored their opponents 256 to 199. ASU’s weak link was the offensive line which allowed 39 sacks (ranked 109th in the nation) during the 2014 season.

Texas A&M wore down late in the season in dropping five of seven games down the stretch. During a three game losing streak to Mississippi State, Ole Miss and Alabama-the Aggies were outscored 142 to 51 and committed a total of 7 turnovers. On the year, the Aggies finished -7 in turnover margin and had issues at home with ball security finishing the 2014 season with a -7 turnover margin at home. Texas A&M had a combined 5-2 record on the road or on a neutral field site last year and finished with an overall 3-3 record at home. The Aggies averaged 32.6 points per game at home last year and averaged 37.4 points per game on the road or on a neutral field site. During the last four games of the regular season in November, the Aggies averaged 26.5 points per game and averaged 316 total yards per game (138 yards less than their season average of 454 total yards per game). More importantly, the Aggies were outscored 61 to 30 in the second half of those four games. On the year, Texas A&M finished with 36 team sacks which was the 22nd best sack total in the nation.

Joseph Lisi is a member of the FWAA (Football Writers Association of America), the Maxwell Football Club and the National Football Foundation. He is the owner of the website: www.goforthe2.com and hosts a weekly college football radio show on SB Nation Radio and FNSTY Sports Radio from 10-12pm EST every Saturday morning. Listen live at: www.sbnationradio.com or www.fntsy.com/radio. Joseph is a former college football researcher for ABC Sports and has been featured on: SportsXRadio with Ken Thomson, ESPN Radio, Sirius XM Radio, FNTSY Sports Network, the Sid Rosenberg Show (640 AM Sports-South Florida), 1560 AM CBS Sports Melbourne, FL and multiple media outlets throughout the nation. Joe appears every Friday with Ken Thomson on SportsXRadio for the Football Fiasco in which every game on the college board is broken down during the show. Follow Joe on Twitter: @goforthe2
@https://twitter.com/GOFORTHE2
Previous BYU vs. Nebraska Week 1 “Inside The Numbers”
Next Texas vs. Notre Dame Week 1 “Inside The Numbers”

Since WR Ipse Lorum has decided to go pro, he has climbed up the draft ...