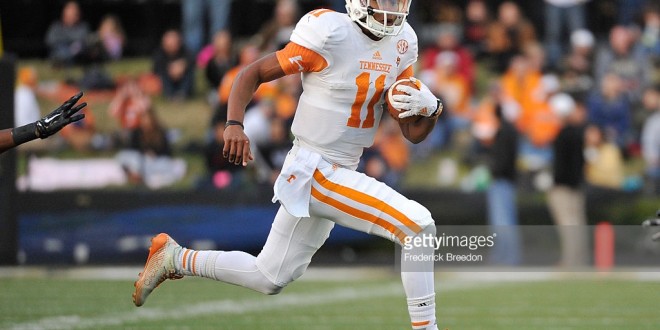 at Vanderbilt Stadium on November 29, 2014 in Nashville, Tennessee.

Bowling Green vs. Tennessee “Inside The Numbers” Week 1

Notes: This game is not played in Knoxville-it is on a neutral field site in Nashville where the Tennessee Titans play.

Head coach Dino Babers has a solid offensive group returning to the 2015 roster. The Falcons return 10 starters from an offense that averaged 30 points per game in 2014. Bowling Green has two solid quarterbacks in Matt Johnson and James Knakpe. Johnson was the opening day starter went down with an injury in week 1 and gave way to Knakpe for the rest of the season. Knakpe put up solid numbers throwing for 18 touchdowns with 3,173 passing yards. Bowling Green has a balanced attacked that rushed for 170 rushing yards per game and threw for 260 passing yards per game. Running back Travis Greene led the team with 949 yards and 12 touchdowns. The Falcons return the team’s top 4 receiving leaders which accounted for 228 receptions for 3,001 yards and 16 touchdowns. The offensive line allowed 28 sacks last season, however, in the last 6 games of the season against physical defensive lines, the unit allowed 18 sacks through 6 games.

The team lost 3 of 4 games down the stretch with the only victory coming in the bowl win against South Alabama. The Falcons were very opportunistic and were +10 in turnover margin in 2014.

Defensively, the Falcons will be starting 5 sophmores on a defense that allowed 33.5 points per game. Bowling Green allowed 202 rushing yards per game (99th overall) and 291 passing yards per game which ranked 122nd in the nation. During the last 4 games of the year, the defense allowed opponents to rush for 248.5 yards per game.

The Vols 2015 hopes for an SEC East crown all hinge on quarterback Josh Dobbs. Tennessee averaged 28.9 points per game and struggled behind a young inexperienced offensive line early in the year. The Vols averaged 146 rushing yards per game and 224 passing yards per game. The offensive line allowed a total of 43 sacks as a unit which ranked 117th in the nation. However, 32 of those sacks came in the team’s first 8 games of the year. During the team’s first seven games of the season, the running game failed to be productive as the Vols averaged 94 rushing yards per game. However, that changed when quarterback Josh Dobbs made his first start against South Carolina. In the team’s last 5 games of the year (including the bowl victory), Dobbs led an offense that averaged 431.6 total yards per game and led the team to 4 victories in that stretch. Dobbs completed 63.3% of his passes and accounted for 17 total touchdowns in 2014 (9 pass, 8 rush).

Tennessee did win their three games on the road or on a neutral field site to end the 2014 season.

Joseph Lisi is a member of the FWAA (Football Writers Association of America), the Maxwell Football Club and the National Football Foundation. He is the owner of the website: www.goforthe2.com and hosts a weekly college football radio show on SB Nation Radio and FNSTY Sports Radio from 10-12pm EST every Saturday morning. Listen live at: www.sbnationradio.com or www.fntsy.com/radio. Joseph is a former college football researcher for ABC Sports and has been featured on: SportsXRadio with Ken Thomson, ESPN Radio, Sirius XM Radio, FNTSY Sports Network, the Sid Rosenberg Show (640 AM Sports-South Florida), 1560 AM CBS Sports Melbourne, FL and multiple media outlets throughout the nation. Joe appears every Friday with Ken Thomson on SportsXRadio for the Football Fiasco in which every game on the college board is broken down during the show. Follow Joe on Twitter: @goforthe2
@https://twitter.com/GOFORTHE2
Previous 8/16 Joe Lisi On Yahoo Sports Radio With Host Rob Kuney
Next Stanford vs. Northwestern “Inside The Numbers” Week 1