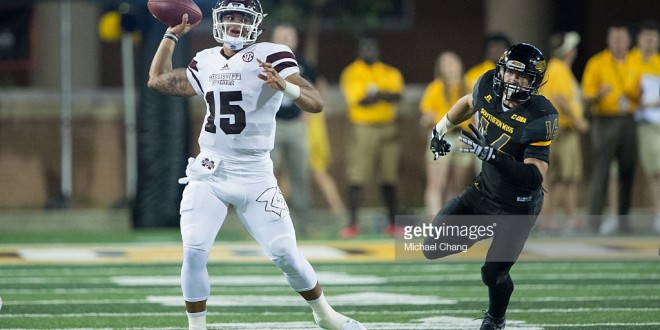 Week 2 LSU vs. Mississippi State “Inside The Numbers”

LSU’s game with McNeese State was cancelled due to inclement weather. However, the Tigers will look to run the football against Mississippi State. In last year’s loss at home, LSU had 89 yards rushing against the Bulldogs defensive front seven and averaged only 2.5 yards per carry in the 34-29 home loss. LSU had 341 total offensive yards but trailed much of the game and had to play catch up in the fourth quarter. In 2014, LSU averaged 225 rushing yards per game and will look to run the football behind a solid offensive line. If the running game can have success early, quarterback Brandon Harris can utilize play action to stretch the field against the Bulldogs. The Tigers completed 50% of their passes in 2014 and will need a better effort in Starkville to pull out the victory. Les Miles and offensive coordinator Cam Cameron will look to running back Leonard Fournette to carry the rock often against Mississippi State. Fournette rushed for 1,034 yards and averaged 5.5 yards per carry. As a unit, LSU averaged over 4.5 yards per carry last year and the Tigers offense has a run first mentality.

Defensively, LSU struggled with the versatility of Bulldogs quarterback Dak Prescott. LSU allowed 302 rushing yards along with 6.2 yards per carry to the Bulldogs in last year’s loss with Prescott rushing for 105 yards and one touchdown. LSU’s defensive front was manhandled by the Bulldogs physical offensive line and will need to step up on the road next week to get the victory. In 2014, LSU was +3 in turnover margin and allowed 153 yards rushing per game. That was the highest total since prior to 2008 by the Tigers and must get better in 2015 for LSU to make a run at the SEC West title.

Mississippi State rushed for 205 yards in last week’s 34-16 road victory  against Southern Mississippi. Quarterback Dak Prescott rushed for 72 yards and one touchdown and will look to step up at home in Starkville this weekend with LSU coming to town.  The Bulldogs will look to pound the football with Prescott on Saturday and see of the Bulldogs offensive line can dictate the tempo. Mississippi State averaged 514 total yards per game last year, the team’s highest total since prior to 2008. Since 2011, the team’s offensive output has risen each season by 25 total yards from 2011-2012, by 52 yards from 2012-2013 and by 80 yards from 2013-2014. In Saturday’s win over Southern Mississippi, the Bulldogs averaged 442 yards and will to duplicate the effort at home against LSU.

Defensively, Mississippi State had a very physical defensive front last year that registered 37 sacks and allowed 152 rushing yards per game. The weakness of the unit last year was the secondary which allowed 273 passing yards per game to their opponents. In last Saturday’s win over Southern Mississippi, the Bulldogs allowed 311 passing yards to the Golden Eagles. The Bulldogs allowed Southern Mississippi to complete 68% of the passes and will need to step up against LSU wide receivers Malachi Dupre (318 yards, 5 tD’s) and Travin Dural (758 yards, 7 TD’s).

Joseph Lisi is a member of the FWAA (Football Writers Association of America), the Maxwell Football Club and the National Football Foundation. He is the owner of the website: www.goforthe2.com and hosts a weekly college football radio show on SB Nation Radio and FNSTY Sports Radio from 10-12pm EST every Saturday morning. Listen live at: www.sbnationradio.com or www.fntsy.com/radio. Joseph is a former college football researcher for ABC Sports and has been featured on: SportsXRadio with Ken Thomson, ESPN Radio, Sirius XM Radio, FNTSY Sports Network, the Sid Rosenberg Show (640 AM Sports-South Florida), 1560 AM CBS Sports Melbourne, FL and multiple media outlets throughout the nation. Joe appears every Friday with Ken Thomson on SportsXRadio for the Football Fiasco in which every game on the college board is broken down during the show. Follow Joe on Twitter: @goforthe2
@https://twitter.com/GOFORTHE2
Previous 9/5 Go For The 2 With Joe Lisi Week 1 College Football
Next Week 2- Oklahoma vs. Tennessee “Inside The Numbers”

9/5 Go For The 2 With Joe Lisi Week 1 College Football
Week 2- Oklahoma vs. Tennessee “Inside The Numbers”