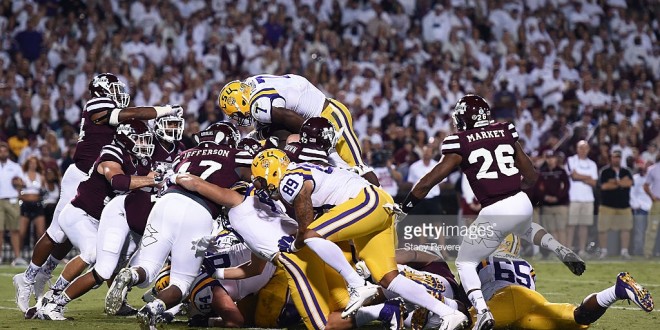 Week 3 Auburn vs. LSU “Inside The Numbers”

Many considered the Tigers a top five team at the start of the season, however, although the team is 2-0 they played two close games including last week’s lackluster 27-20 victory over FCS  opponent Jacksonville State in overtime. The Tigers are averaging 29 points per game and are very inconsistent offensively. Auburn is rushing for 177 yards per game and passing for 186 yards per game for a total of 363 total yards per game. That is very uncharacteristic of a Gus Malzhan team. In 2014, the Tigers rushed for 255 yards per game and in 2013 the team averaged 328 yards on the ground. This year, the coaching staff is trying to put more emphasis on the passing attack with quarterback Jeremy Johnson, however, so far the tempo of the offense is out of sync. Prior, Malzhan utilized a fast tempo rushing attack which would wear down opposing defensive fronts and open up the passing attack for former quarterback Nick Marshall. This year, the emphasis has been on the passing game which has put more pressure on Johnson and the wide receiver corps to produce. Johnson has struggled reading defenses and must step up his game Saturday in a tough road environment in Death Valley. Johnson has completed 60.4% of his passes for 373 yards with 3 touchdowns and 5 interceptions. Wide receiver Ricardo Louis leads the team with 13 receptions for 130 yards with one touchdown. Wide receiver Duke Williams has not stepped up this season and has 5 receptions for 62 yards with no touchdowns.

Defensively, Auburn is allowing 22 points per game and has not fixed the issues in run support. In 2014, the team allowed 168 rushing yards per game, however, in their five losses last year- they allowed 263 yards on the ground. In the team’s first two games this ear, the Tigers have allowed 199 rushing yards per game will face a run heavy offense this Saturday in LSU. The Tigers have allowed 186 passing yards per game and have been very good at getting pressure on opposing quarterbacks with 6 sacks in the first two games. In order to get the road victory, Auburn must be able to force turnovers. On the season, the Tigers are -3 in turnover margin.

The Tigers played their first game last week (first game cancelled due to bad weather vs. McNeese St) on the road in Starkville- defeating Mississippi State 21-19. LSU jumped out early 21-6 and held on as a last second field goal went wide right as time expired for the Bulldogs. LSU rushed for 266 yards last week and will look to attack  the center of the Auburn defense with running back Leonard Fournette. Last week, Fournette ripped the Bulldogs for 159 yards and 3 touchdowns on the ground. He averaged 5.6 yards per carry and look for the “Madhatter” to pound Fournette behind a heavy offensive line. Quarterback Brandon Harris completed 9 of 14 passes for 71 yards and will need to step up this week at home in a rivalry game. LSU rushed for 225 per game last year and will need to have success in the ground game to get the victory on Saturday.

Defensively, the Tigers allowed Mississippi State back into the game and looked vulnerable in the secondary as Bulldogs quarterback Dak Prescott had great success in the passing attack. The Tigers allowed 335 yards and one touchdown through the air to Mississippi State which over the years has been one of LSU’s strengths. Former defensive coordinator John Chavis (defensive coordinator Texas A&M) prided the Tigers on solid pass defense which allowed him to play bump and run coverage along with utilizing blitz packages. Now LSU must adjust under new defensive coordinator Kevin Steele. LSU was not able to create turnovers last week and must be able to disrupt Auburn’s offense and get to the football. Last season, LSU allowed 298 rushing yards and 6.1 yards per carry in their 41-7 loss on the road in Auburn last season. In big games, penalties can cost a team field position or even possessions. In last week’s victory over Mississippi State, the Tigers committed 9 penalties in the win.

Joseph Lisi is a member of the FWAA (Football Writers Association of America), the Maxwell Football Club and the National Football Foundation. He is the owner of the website: www.goforthe2.com and hosts a weekly college football radio show on SB Nation Radio and FNSTY Sports Radio from 10-12pm EST every Saturday morning. Listen live at: www.sbnationradio.com or www.fntsy.com/radio. Joseph is a former college football researcher for ABC Sports and has been featured on: SportsXRadio with Ken Thomson, ESPN Radio, Sirius XM Radio, FNTSY Sports Network, the Sid Rosenberg Show (640 AM Sports-South Florida), 1560 AM CBS Sports Melbourne, FL and multiple media outlets throughout the nation. Joe appears every Friday with Ken Thomson on SportsXRadio for the Football Fiasco in which every game on the college board is broken down during the show. Follow Joe on Twitter: @goforthe2
@https://twitter.com/GOFORTHE2
Previous Week 3 Ole Miss vs. Alabama “Inside The Numbers”
Next Week 3 BYU vs. UCLA “Inside The Numbers”