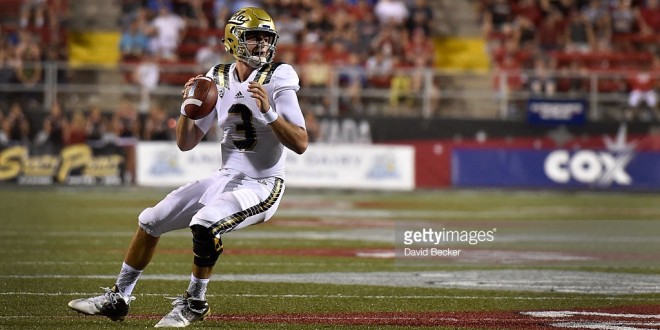 Week 3 BYU vs. UCLA “Inside The Numbers”

BYU has won two games this season against Nebraska and Boise State on Hail Mary plays. Quarterback Tanner Magnum has shown the ability to lead the team in crunch time. BYU is 3-5 vs. PAC-12 since 2011 including a bowl loss to Washington 31-16 in 2013 and three losses to Utah from 2011-2013.

The Cougars have come from behind in both of their victories this season and will need to start fast on the road against top ranked UCLA. BYU is averaging 34 points per game and has been inconsistent offensively, since starting quarterback Taysom Hill was lost for the season with a foot injury. BYU has had trouble running the football this season and is averaging 102 yards per game.  The Cougars have had success through the air averaging 210 passing yards per game and will need quarterback Tanner Magnum to be aggressive early on to attack the UCLA secondary. Magnum has completed 24 of 39 passes (61.5%)  for 420 yards with 3 touchdowns and 2 interceptions.  BYU must be able to run the football to keep the UCLA defense off balance. Otherwise, UCLA can utilize blitz packages to put pressure on Magnum and a suspect offensive line for the Cougars. Through two games, BYU has allowed 7 sacks and if UCLA is able to get pressure, it will force BYU to use running backs in blocking schemes to help protect Magnum. This can make BYU one dimensional as the game plays out. In 2014, the Cougars offensive line allowed 36 sacks as a unit.

Defensively, BYU is allowing 26 points per game and is +2 in turnover margin. BYU has played disciplined football and is very good in run support allowing 95 rushing yards per Jumping Castle game. BYU’s defensive front has been able to get pressure and has 7 sacks through the first two games of the year. Linebacker Harvey Langi leads the team with 3 sacks and he will need a similar performance on Saturday to help his team get the road win. BYU has been penalized 4.5 penalties per game and will need to continue to play that way in order to help their team with field position.

The Bruins have been hitting on all cylinders to start the season and are averaging 35.5 points per game. Led by freshman quarterback Josh Rosen the Bruins have rushed for 212 yards per game and have been very aggressive through the air passing for 312 yards per game. Rosen has completed 50 of 77 passes for 574 yards with 4 touchdowns and one interception. RB Paul Perkins leads the ground attack and has rushed for 210 yards averaging 6.1 yards per carry with 2 touchdowns. The offensive line has done an excellent job in protecting Rosen and will need to continue that performance Saturday night against a physical BYU front seven.

Defensively, UCLA is even in turnover margin on the year and will need to win the turnover battle playing at home. UCLA has allowed 9.5 points per game and has allowed 139 yards on the ground to opposing offenses. The secondary has been stellar so far yielding 147 passing yards per game and will look to shut down the Cougars. Heading into this game, one cause of concern could be the inability to generate a pass rush. The Bruins have recorded one sack through the first two games and will need to challenge the Cougars offensive line to win this game on the defensive side of the football. If they cannot get pressure on Magnum, BYU could have success throwing the football. UCLA has averaged 8 penalties through the first two games.

Joseph Lisi is a member of the FWAA (Football Writers Association of America), the Maxwell Football Club and the National Football Foundation. He is the owner of the website: www.goforthe2.com and hosts a weekly college football radio show on SB Nation Radio and FNSTY Sports Radio from 10-12pm EST every Saturday morning. Listen live at: www.sbnationradio.com or www.fntsy.com/radio. Joseph is a former college football researcher for ABC Sports and has been featured on: SportsXRadio with Ken Thomson, ESPN Radio, Sirius XM Radio, FNTSY Sports Network, the Sid Rosenberg Show (640 AM Sports-South Florida), 1560 AM CBS Sports Melbourne, FL and multiple media outlets throughout the nation. Joe appears every Friday with Ken Thomson on SportsXRadio for the Football Fiasco in which every game on the college board is broken down during the show. Follow Joe on Twitter: @goforthe2
@https://twitter.com/GOFORTHE2
Previous Week 3 Auburn vs. LSU “Inside The Numbers”
Next Week 3 Stanford vs. USC “Inside The Numbers”