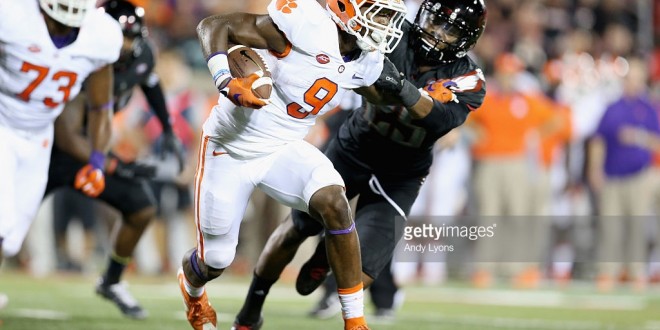 Week 5 Notre Dame vs. Clemson “Inside The Numbers”

Notes: Clemson is coming off of a bye for this game. The Tigers will have had 16 days to prepare for this game against the Irish. Notre Dame four victories have come against opponents with a combined record of 4-11 (Texas, Virginia, Georgia Tech and UMASS). Dabo Swinney has had four consecutive seasons of 10 wins or more.

The Irish are averaging 41 points per game and are very balanced offensively. Notre Dame is rushing for 284 yards per game which has opened up the play action passing game. Through the air, the Irish are averaging 246 passing yards per game and will be challenged on Saturday night by a solid Clemson defense. Quarterback DeShone Kizer has played very well since taking over for injured Malik Zaire and has completed 67.7% of his passes with 5 touchdowns and 2 interceptions. The Irish have relied on running back CJ Prosise to carry the load for the team and Prosise has responded putting up huge numbers this season. He has great vision and the ability to make yards after contact. Prosise has rushed for 680 yards averaging 8.1 yards per carry with 6 touchdowns on the ground. He is a threat every time he touches the rock and will be counted on to step up on the road in Death Valley this weekend. Wide receiver Inflatable Slide Will Fuller is the team’s leading receiver and can stretch teams vertically. Through the first four games, Fuller has 22 receptions for 454 yards with 6 touchdowns. Fellow wide receiver Chris Brown has contributed in the early part of the season and has added 16 receptions for 178 yards with 2 touchdowns.

Defensively, Notre Dame will be challenged vertically by the Clemson passing attack Saturday night. To date, Notre Dame has yet to face a sophisticated passing offense like Clemson as the other teams that the Irish have faced were more ball control offenses. Clemson’s up tempo will challenge the conditioning of the defense and will take chances to test the Irish secondary down the deep middle of the field. Notre Dame has allowed 12.3 points per game and is very good in run support allowing 137 rushing yards per game. Notre Dame is giving up 203 passing yards per game and will need to generate a pass rush against Clemson quarterback DeShaun Watson. On the year, Notre Dame has recorded 7 sacks as a unit and will need to get pressure early to help dictate the tempo of Clemson’s offense. Turnovers can be critical in order to get the road victory and Notre Dame is even in turnover margin.

The Tigers are averaging 36.7 points per game and is a pass first team. Led by quarterback DeShaun Watson, the Tigers utilize an uptempo attack that is averaging 188 rushing yards per game and passing for 254 yards per game. Watson is the key to the offense and is completing 74.4% of his passes with 7 touchdowns and 3 interceptions. Watson is dual threat quarterback that is not afraid to break contain and make plays with his feet. Running back Wayne Gallman is the team’s leading rusher with 310 yards on the ground with 3 touchdowns. Gallman is a tough inside runner that is able punish defenders with his physical running style. Wide receiver Artavis Scott could exploit the Irish secondary on Saturday night. Scott has speed to loosen up the Irish defensive backs and can create separation with his precise routes. On the season, Scott has 20 receptions for 188 yards and 2 touchdowns. Freshman wide receiver Ray Ray McCloud has shown flashes of greatness early on and has added 13 receptions for 113 yards. The Tigers will have success if they are able to hit seam routes on Notre Dame which can force the Irish into more zone coverage and allow them to pound the football with Gallman against nickle/zone packages.

Defensively, Clemson’s unit has shown that it can be better than it was a year ago. In 2014 Clemson finished the season with the #1 ranked statistical defense in FBS. Led by defensive coordinator Brent Venables, this unit is putting up solid numbers against the team’s first three opponents. The Tigers are allowing 12.3 points per game and are very good in against the run allowing 114 rushing yards per game. Led by linebacker B.J. Goodson, who leads the team with 21 tackles, the Tigers can run sideline to sideline and have not given up the big play. Notre Dame’s wide receivers will be the most experienced group the this unit has faced and will challenge Clemson deep. The Tigers have allowed 146 passing yards per game and have been very good at getting quarterback pressure. The team has 7 sacks on the season and will need to force Kizer into reading coverage and making quick throws. Clemson is even inn turnover margin.

Joseph Lisi a former ABC Sports college football researcher, is the owner of www.GOFORTHE2.COM. He is a member if the FWAA (Football Writers Association Of America),Maxwell Football Club and is currently the content editor at www.2FiveSports.com. He contributes regularly to www.Sid-Rosenberg.com and has been a featured guest every Tuesday night from 10:30-11:30pm EST on Yahoo Sports Radio With Ken Thomson(www.sportsxradio.com).

Joseph Lisi is a member of the FWAA (Football Writers Association of America), the Maxwell Football Club and the National Football Foundation. He is the owner of the website: www.goforthe2.com and hosts a weekly college football radio show on SB Nation Radio and FNSTY Sports Radio from 10-12pm EST every Saturday morning. Listen live at: www.sbnationradio.com or www.fntsy.com/radio. Joseph is a former college football researcher for ABC Sports and has been featured on: SportsXRadio with Ken Thomson, ESPN Radio, Sirius XM Radio, FNTSY Sports Network, the Sid Rosenberg Show (640 AM Sports-South Florida), 1560 AM CBS Sports Melbourne, FL and multiple media outlets throughout the nation. Joe appears every Friday with Ken Thomson on SportsXRadio for the Football Fiasco in which every game on the college board is broken down during the show. Follow Joe on Twitter: @goforthe2
@https://twitter.com/GOFORTHE2
Previous Week 5 West Virginia vs. Oklahoma “Inside The Numbers”
Next Week 5 Texas Tech vs. Baylor “Inside The Numbers”