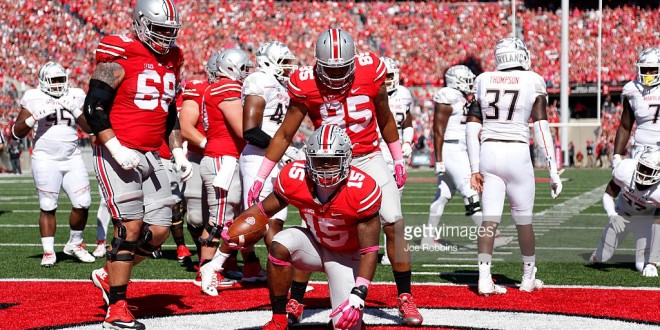 Week 7 Penn State vs. Ohio State “Inside The Numbers”

The offense is coming off an impressive output in last Saturday’s victory over the Indiana Hoosiers winning by score of 29-7 in Happy Valley. The offense had 420 total yards last week and  quarterback Christian Hackenberg found his grove by accounting for four touchdowns (2 passing, 2 rushing) in the win. On the year, the Nittany Lions are averaging 25.2 points per game and are rushing for 157 yards per game. Head coach James Franklin has been relying on the running game to carry the load this year and has not put Hackenberg in a lot of passing situations due to the lack of cohesiveness on the offensive line. The offensive line has allowed 19 sacks, however, 10 of those came int he week one loss to Temple. Since that time, the offensive game plan has been methodical favoring a ball control attack to wear down defenses. That will need to change this week on the road against Ohio State. Penn State must be able to stretch the Buckeyes vertically to take the pressure off of the running game and to force Ohio State from playing “eight in the box”. Hackenberg has completed 53% of his passes for 1,086 yards with 7 touchdowns and 2 interceptions. Last week , Penn State was without their leading running backs Saquon Barkley and Akeel Lynch who were both injured and did not play last week. Both players have combined for 635 rushing yards with 5 touchdowns and are listed as questionable for the game. Wide receiver Chris Godwin has had a solid season and leads the team with 27 receptions for 390 yards and one touchdown.

Defensively, Penn State has the 10th Inflatable Water Slide best defense in FBS allowing 275 total yards per game and is yielding 14.3 points per game. The Nittany Lions have allowed 117 rushing yards per game and have given up 158 passing yards per game. The team will need a great effort this coming weekend on the road to pull off the upset. Defensive lineman Carl Nassib leads the team with 10 sacks and is a dominant force that can disrupt the timing of opposing offensive lines. On the year, the Nittany Lions have recorded 25 total sacks which is tied for 1st in FBS with Oklahoma State. Linebacker Jason Cabinda leads the team with 46 total tackles and Penn State has found ways to create turnovers with a +8 in turnover margin. Penn State needs to force Ohio State into a slow game time of possession game. Penn State’s offense is not built for shootout with the Buckeyes and their uptempo attack. Last season, the team did a great job in slowing down the game and will need the same effort on the road to get the victory.

Ohio State is averaging 36.8 points per game and is very balanced in offensive production. On the year, the Buckeyes are averaging 2320 passing yards per game and are rushing for 230 yards per game. Quarterback Cardale Jones has been inconsistent and has completed 62.7% of his passes for 1,158 yards with 7 touchdowns and 5 interceptions. The Buckeyes must find ways to get their play makers in space on Saturday night against a tough Penn State defense. Running back Ezekiel Elliott leads the team with 835 rushing yards and 10 touchdowns. Elliott is a rare combination of speed and strength whose running style wears down defenses late in games. The Buckeyes will need to spread out the Nittany Lions on Saturday night to neutralize the Penn State pass rush and force the Nittany Lions to run sideline to sideline. Wide receivers Michael Thomas, Jalin Marshall and Braxton Miller will be the key for the Buckeyes to get the home victory. Each player is dynamic in space and the trio has combined for 56 receptions for 870 yards and 8 touchdowns.They all have the speed to take the top off of the defense and have great ability with yards after the catch.

The Buckeyes have not been the same defense in 2015 and will need to step in the Horseshoe this weekend. On the year, the team is allowing 17.3 points per game and is yielding 152 rushing yards per game. The secondary has been solid allowing 147 passing yards per game and will give the Buckeye options to blitz Hackenberg in the game to create pressure on the Penn State offensive line. Defensive lineman Tyquan Lewis leads the team with 5.5 sacks and is a having a superb 2015 season. A cause of concern has been the turnover margin for the team. Last year, the team finished with +7 margin and this year the team is struggling at -2. In order to get the victory, the Buckeyes will need to force turnovers on Hackenberg and the Penn State offense. Linebacker Raekwon McMillan leads the team with 62 total tackles and looks to be a factor in this game. Look for Ohio State to be very aggressive on the defensive side of the ball taking chances early on to create pressure and force Penn State into passing situations.

Joseph Lisi is a member of the FWAA (Football Writers Association of America), the Maxwell Football Club and the National Football Foundation. He is the owner of the website: www.goforthe2.com and hosts a weekly college football radio show on SB Nation Radio and FNSTY Sports Radio from 10-12pm EST every Saturday morning. Listen live at: www.sbnationradio.com or www.fntsy.com/radio. Joseph is a former college football researcher for ABC Sports and has been featured on: SportsXRadio with Ken Thomson, ESPN Radio, Sirius XM Radio, FNTSY Sports Network, the Sid Rosenberg Show (640 AM Sports-South Florida), 1560 AM CBS Sports Melbourne, FL and multiple media outlets throughout the nation. Joe appears every Friday with Ken Thomson on SportsXRadio for the Football Fiasco in which every game on the college board is broken down during the show. Follow Joe on Twitter: @goforthe2
@https://twitter.com/GOFORTHE2
Previous Week 7 Alabama vs. Texas A&M “Inside The Numbers”
Next Week 7 West Virginia vs. Baylor “Inside The Numbers”