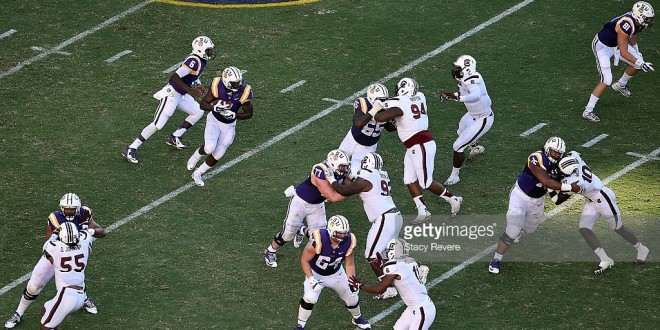 Week 7 Florida vs. LSU “Inside The Numbers”

LSU is 4-1 against Florida since 2010 with the four victories coming by an average margin of 12 points per game. Florida won in 2012 by a score of 14-6 and last year the team lost in the Swamp by a score of 30-27. Florida starting quarterback Will Grier has been suspended for the season for a failed PED test. Sophmore quarterback Treon Harris will get the start Saturday night in Baton Rouge.

Head coach Jim McElwain has done a fantastic job in grooming the offense and mentoring quarterback Will Grier. The Gators are averaging 32.2 points per game and are averaging 138 rushing yards per game. The passing game has consistently made progress every week and the team is passing for 246 yards per game with Grier getting more confident in the system. On the year, Grier has completed 65.8% of  his passes for 1.204 yards with 10 touchdowns and 3 interceptions. The inconsistency in the Gators running game has forced McElwain to open up the play calling and allow Grier to throw down the field. However, with his absence, the pressure will fall onto backup Treon Harris shoulders Saturday night. Harris was the starter last year under head coach Will Muschamp and has game experience under his belt. Harris was also suspended for a game by head coach McElwain for violating team rules and will need to play his best this weekend. Harris is a dual threat quarterback, who has completed 19 of 27 passes for 269 yards with 2 touchdowns and no interceptions.  Florida is rushing for 138 yards per game and will need a better effort in Baton Rouge on Saturday night to take the pressure off of the Gators offensive line. On the year, the Gators have allowed 15 sacks through the first six games and cannot afford to get into third down and long situations this weekend. Running back Kelvin Taylor could play a big role against the Tigers and look for Florida to establish him early in this game. Taylor leads the team with 438 rushing yards and 7 touchdowns. He has great vision and has deceptive speed that allows him to get to the edge of opposing defenses. Wide receivers Demarcus Robinson, Brandon Powell and Antonio Calloway have developed into a solid trio that has been playing very well over the last three games. Robinson leads the team with 34 receptions for 330 yards and 2 touchdowns while Powell and Calloway have combined for 29 receptions for 460 yards and 5 touchdowns.

The Gators boast the 16th best defense in college football allowing 296 total yards per game. Florida is giving up 14.3 points per game and is yielding 99 rushing yards per game which is 12th best in FBS. The defense has been very good at getting pressure on opposing quarterbacks and has recorded 21 sacks through the first six games this season. Look for Florida to be very aggressive against LSU and force Tigers’ quarterback Brandon Harris to beat them with his arm. The Gators are very good at creating turnovers at key moments and are +8 in turnover margin (8th best in FBS) this season. The secondary is an experienced group that is giving up 197 passing yards per game and is led by cornerback Vernon Hargreaves III-who leads the team with 3 interceptions on the season.

The Tigers are going to want to pound the football against Florida on Saturday night and see if the Gators wear down as the game progresses. LSU is averaging 37.8 points per game and relies on the team’s “heavy offensive line” to run the football between the tackles, they are also the favorites as a straight-up pick this weekend according to My Sports Book. The offense is rushing for 346 yards per game and is ranked 3rd in FBS this year led by Heisman trophy candidate running back Leonard Fournette. Fournette is an explosive back who has 1,022 rushing yards averaging 8.5 yards per carry with 12 touchdowns. He has all the intangibles of a great running back  and his physical style epitomizes the Tigers “blue collar” mentality. Head coach Les Miles does not ask alot out of quarterback Brandon Harris, however, that could change on Saturday night playing Florida. LSU will need to stretch the Gators to neutralize them from keying on Fournette. On the year, Harris has completed 57.3% of his passes for 610 yards with 4 touchdowns and no interceptions. Harris has not been consistent in throwing the deep ball, but will need to take chances to force the Gators defense to loosen up. Wide receivers Travin Dural and Malachi Dupre are two explosive players that have the speed to stretch the Gators. However, LSU has not had to challenge opposing secondaries because of the success of the running game. Dural leads LSU with 14 receptions for 229 yards and one touchdown while Dupre has added 14 receptions for 196 yards with one score.

The Tigers defense is yielding 22.0 points per game and will be challenged by Florida Saturday night. LSU is solid in run support allowing 99 rushing yards per game and the team is allowing 181 yards through the air. Playing at home is a significant advantage for LSU and the Tigers have been very good at forcing mistakes by opposing offenses at home. LSU is +6 in turnover margin and will look to pressure Harris early on to take advantage of his inexperience this season. The unit has 12 sacks on the season and has two solid linebackers in Kendell Beckwith along with Deion Jones. Both players are very fast and make plays sideline to sideline. Beckwith leads the team with 33 total tackles and Jones is second on the team with 31 total tackles.

Joseph Lisi is a member of the FWAA (Football Writers Association of America), the Maxwell Football Club and the National Football Foundation. He is the owner of the website: www.goforthe2.com and hosts a weekly college football radio show on SB Nation Radio and FNSTY Sports Radio from 10-12pm EST every Saturday morning. Listen live at: www.sbnationradio.com or www.fntsy.com/radio. Joseph is a former college football researcher for ABC Sports and has been featured on: SportsXRadio with Ken Thomson, ESPN Radio, Sirius XM Radio, FNTSY Sports Network, the Sid Rosenberg Show (640 AM Sports-South Florida), 1560 AM CBS Sports Melbourne, FL and multiple media outlets throughout the nation. Joe appears every Friday with Ken Thomson on SportsXRadio for the Football Fiasco in which every game on the college board is broken down during the show. Follow Joe on Twitter: @goforthe2
@https://twitter.com/GOFORTHE2
Previous Oct. 13th Joe Lisi Talking Week 7 CFB On Yahoo Sports Radio
Next Oct. 17th Go For The 2 With Joe Lisi On Yahoo Sports Radio