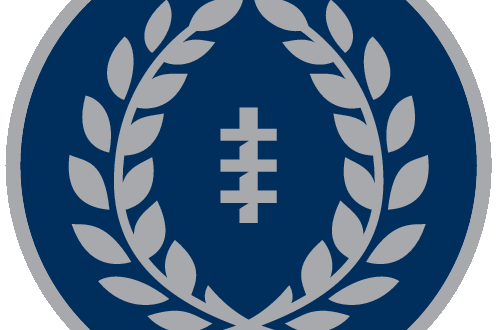 NEW YORK (March 21, 2016) – The New York City Chapter of the National Football Foundation (NFF) announced today that it will hold its annual “Elite Eleven” Scholar-Athlete Award Banquet on Tuesday, April 5 th honoring the finest student-athletes from the NYC high school gridiron. The event will begin with a reception at 6:00pm followed by dinner at 7:00pm at the historic New York Athletic Club, 180 Central Park South in Manhattan.

The chapter will also present New York Jets Wide Receiver Brandon Marshall with the Ernie Accorsi Humanitarian Award. Named after the retired New York Giants General Manager and distinguished NFL Executive Ernie Accorsi, the award is given to an individual who has made significant contributions to the game of football and the community in which they live. Accorsi, who is a founding board member of the chapter, will make the presentation to Brandon Marshall.

Brandon Marshall is a 6-time Pro Bowl wide receiver for the New York Jets, this past season he had 109 Catches for 1,502 yards and 14 Touchdowns. In 2011, Brandon was diagnosed with Borderline Personality Disorder. Upon diagnosis, Brandon decided that he would make it his personal mission and primary focus in life, to raise awareness and help others who are struggling with BPD and other mental health disorders. Shortly after he founded Project 375, a nonprofit organization dedicated to eradicating the stigma surrounding mental illness and disorders. Brandon has been able to use his NFL platform to raise millions of dollars for Project 375 and help thousands of people cope.

The chapter will also present CJ O’Neil, Head Football Coach at Cardinal Hayes High School in the Bronx with its Vincent O’Connor Coach of the Year Award. In his 11th year as Head Coach, CJ led Cardinal Hayes to a 9-3 record this year and Cardinal Hayes’ first ever CHSFL AAA Championship Game. The team finished the season ranked #2 in NYC and #23 in the tristate area by MSG Varsity. CJ is a graduate of Hofstra University where he played Center and Defensive End for the Pride from 1990-1993.

Coach Vincent O’Connor finished his career at Saint Francis Preparatory School as the second-winningest football coach in New York State high school history with 341 wins in 61 years as Head Football Coach. In 2015 Coach O’Connor passed away at the age of 85. He guided St. Francis to 14 CHSFL AAA Championships and undefeated seasons in 1957,1964, 1966m 1972, 1973 and 1983. Coach O’Connor was named New York High School Coach of the Year twenty times and National Coach of the Year in 1992.

Don McPherson, the celebrated Syracuse quarterback and local television football analyst on SNY.tv, will emcee the event. A unanimous All-America selection for the Orange, McPherson won the Maxwell Award and Davey O’Brien National Quarterback Award in 1988 and earned induction into the College Football Hall of Fame in 2008. An entrepreneur and accomplished football analyst, McPherson continues to use his success as a platform to advocate for women’s rights and address other complex social issues. McPherson is also a founding member of the NYC Chapter of the National Football Foundation.

The chapter’s awards committee, which Bouncy Castle For Sale includes local coaches and business leaders, selected 11 exceptional scholar-athletes for recognition at the event this year. Each honoree will receive a $1,000 college scholarship and a commemorative plaque. The committee judged the candidates based on their combined achievements on the field, in the classroom and for their leadership contributions in their respective communities. To qualify, recipients must have been a senior playing for a public or private high school located in one of the five boroughs of New York City this past fall. This year’s high school honorees include:

The Board of Directors for the NYC Chapter of the National Football Foundation:

– Joseph Lisi, Director of Communications, Go for the 2 Media

Founded in 2012, the NYC Chapter of the National Football Foundation exists to honor the top high school football players who participate in the five boroughs of New York City, recognizing them for their performance on the field, in the classroom and as leaders in the community. The chapter also honors outstanding individuals for their contributions to the game of football. For more information on the chapter and its activities, please visit www.nffnyc.org or for information about the national organization visit www.footballfoundation.org.

Joseph Lisi is a member of the FWAA (Football Writers Association of America), the Maxwell Football Club and the National Football Foundation. He is the owner of the website: www.goforthe2.com and hosts a weekly college football radio show on SB Nation Radio and FNSTY Sports Radio from 10-12pm EST every Saturday morning. Listen live at: www.sbnationradio.com or www.fntsy.com/radio. Joseph is a former college football researcher for ABC Sports and has been featured on: SportsXRadio with Ken Thomson, ESPN Radio, Sirius XM Radio, FNTSY Sports Network, the Sid Rosenberg Show (640 AM Sports-South Florida), 1560 AM CBS Sports Melbourne, FL and multiple media outlets throughout the nation. Joe appears every Friday with Ken Thomson on SportsXRadio for the Football Fiasco in which every game on the college board is broken down during the show. Follow Joe on Twitter: @goforthe2
@https://twitter.com/GOFORTHE2
Previous 2016 Fast Forward: Week 1 North Carolina vs. Georgia “Inside The Numbers”
Next Interview With Former West Virginia RB Avon Cobourne