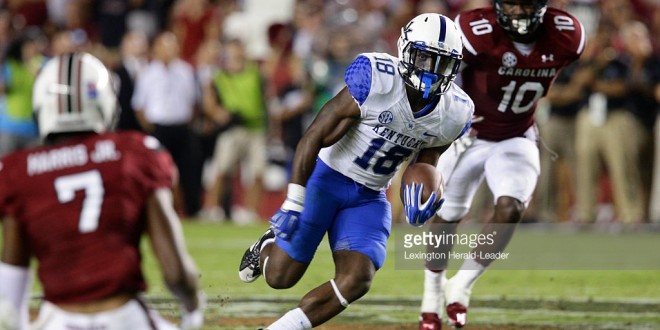 Kentucky running back Stanley Williams (18) picks up some of his 107 rushing yards against South Carolina in the fourth quarter at Williams-Brice Stadium in Columbia, S.C., on Saturday, Sept. 12, 2015. Kentucky won, 26-22. (Mark Cornelison/Lexington Herald-Leader/TNS)

Week 3 Florida vs. Kentucky “Inside The Numbers”

Notes: Florida has won 28 straight games against Kentucky with the last five victories coming by an average of 26.6 points per game. However, last season the Wildcats pushed the Gators and lost in the Swamp in triple overtime 36-30. Kentucky is 1-0 in SEC play (beat South Carolina last week)  and this will be Florida’s first SEC game of the year.

New head coach Jim McElwain has built an explosive offense through the first two games this season as the Gators are averaging 46 points per game. McElwain is utilizing a balanced attack in  Gainesville very similar to what he built at Colorado State. The Gators are averaging 195 rushing yards per game and are passing for 294 yards per game. Quarterback Will Grier has looked very sharp completing 74.3% of his passes for 317 yards with 4 touchdowns and one interception. Florida has been able to get the ball to 15 different receivers through the first two games and this should help build offensive depth as the season progresses. Wide receiver Demarcus Robinson Bouncy Castle For Sale leads the team with 11 receptions for 89 yards with one touchdown and tight end DeAndre Goolsby has 6 receptions for 132 yards and one touchdown. Entering the season the Gators offensive line was a concern due to injuries and lack of depth. However, this group has played very well early on and has allowed 2 sacks during the first two games. In order to get the victory Saturday, Florida will need to attack the Wildcats defense between the tackles and have success in the running game. This will open up the play action passing attack and put pressure on the Kentucky defense.

Defensively, Florida is very stingy in run support yielding 25 rushing yard per game and holding opponents to 1.1 yards per carry. The Gators can dictate the tempo of this game is they are able to shut down the rushing attack of Kentucky. The Gators will need to force turnovers and through the first two games Florida is +1 in turnover margin. Cornerback Vernon Hargreaves leads the secondary, however, they have not played consistently during the first two games of the year. Florida has allowed 241 passing yards per game and will need to step up against Kentucky quarterback Patrick Towles. Last season, the Gators had 30 sacks as a unit and this year the group is off to a fast start with 5 sacks in the first two games.

The Wildcats are fresh off their upset win against South Carolina and will be looking for another upset this Saturday at home against Florida. Kentucky is averaging 33 points per game and is led by Quarterback Patrick Towles who has shown poise this year under center. Towles has completed 58.7% of his passes with three touchdowns and two interceptions and the Wildcats are averaging 224 passing yards per game. His main targets early on have been wide receivers Garrett Johnson and Dorian Baker. Johnson has 10 receptions for 130 yards and one touchdown while Baker has added 8 receptions for 105 yards. In order to have have success in this game, Kentucky must control the clock against Florida and score first to put the pressure on the Gators on the road. Kentucky must try and run the football to keep the Gators from utilizing blitz packages which could pressure on the Wildcats offensive line. Kentucky is averaging 192 rushing yards per game and has two solid running backs in Boom Williams along with Jo Jo Kemp. Williams leads the team with 242 rushing yards (1o yards per carry) and one touchdown while Kemp has added 112 rushing yards averaging 7 yards per carry with one touchdown.

Joseph Lisi is a member of the FWAA (Football Writers Association of America), the Maxwell Football Club and the National Football Foundation. He is the owner of the website: www.goforthe2.com and hosts a weekly college football radio show on SB Nation Radio and FNSTY Sports Radio from 10-12pm EST every Saturday morning. Listen live at: www.sbnationradio.com or www.fntsy.com/radio. Joseph is a former college football researcher for ABC Sports and has been featured on: SportsXRadio with Ken Thomson, ESPN Radio, Sirius XM Radio, FNTSY Sports Network, the Sid Rosenberg Show (640 AM Sports-South Florida), 1560 AM CBS Sports Melbourne, FL and multiple media outlets throughout the nation. Joe appears every Friday with Ken Thomson on SportsXRadio for the Football Fiasco in which every game on the college board is broken down during the show. Follow Joe on Twitter: @goforthe2
@https://twitter.com/GOFORTHE2
Previous Week 3 Stanford vs. USC “Inside The Numbers”
Next 9/15 Joe Lisi Talking Week 3 CFB On Yahoo Sports Radio