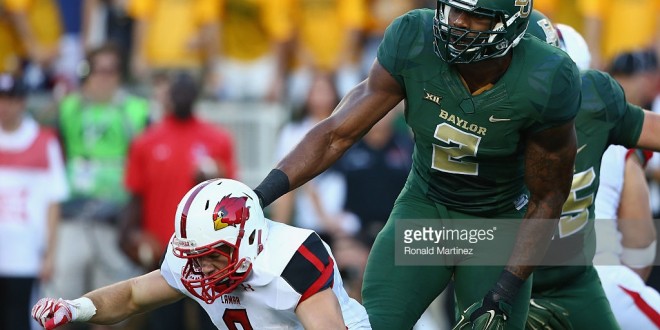 Week 5 Texas Tech vs. Baylor “Inside The Numbers”

Notes: Baylor is 4-1 against the Red Raiders since 2010 with an average margin of victory of 15.5 points per game. Baylor won last year’s match up 48-46. This game is on a neutral field site in Arlington, Texas.

The Red Raiders are coming off a heart break loss in the final seconds to TCU losing 55-52. Texas Tech put up over 600 yards of total offense in the loss and the team is averaging 53.8 points per game this season. The Red Raiders have been a pass first team that is averaging 397 passing yards per game with quarterback Patrick Mahomes (63.% comp. 1,421 yards 11 TD’s)  and can score every time they have the football. Texas Tech ranks 5th overall in total offense averaging 594 total yards per game. The Raiders utilize different offensive formations to create mismatches and are still able to beat opposing teams with the ground game that is averaging 197 rushing yards per game. The offensive line has done a great job in protecting Mahomes and has only allowed 1 sack in the first four games. In order to get the victory on Saturday, the Red Raiders will need to continue to get big plays in the running game on the Baylor defense.  This game has the makings of a shoot out and Mahomes will need time to pick apart the Bears secondary. Wide receiver Jakeem Grant is the team’s leading receiver with 29 receptions for 413 yards with 2 touchdowns.

Defensively, the Red Raiders will need an emotional effort after last week’s loss and will need to step up and create turnovers. Last week, the team failed to create turnovers against TCU and allowed 750 total yards of offense to the Horned Frogs. Texas Tech is allowing 36 points per game and has not been able to slow down opposing team’s rushing attacks. On the year, the Red Raiders are giving up 254 yards per game on the ground and are allowing 301 passing yards per game. In order to get the upset, Texas Tech must be able to get pressure on Baylor quarterback Seth Russell. This has been a problem so far with the defense and through four games the team has 3 sacks as a unit.  The Red Raiders will have to take chances by blitzing in order to get pressure on Russell and the offensive line. Texas Tech is +5 in turnover on the season and this has been a major reason why the team has had success early on. Last year, the team was -13 in turnover margin. Texas Tech ranks 43rd overall in redzone defense allowing teams to convert 77.8% of the time.

The Bears have the nation’s best offensive attack that is averaging 767 total yards per game. Baylor does not shy away from the running game and the Bears love to pound the football averaging 379 rushing yards per game. Running back Shock Linwood leads the team in rushing with 363 yards per game and is averaging 8.6 yards per carry with 4 touchdowns. The Bears like to run the football to keep opposing defenses from utilizing blitz packages. Quarterback Seth Russell has had a solid season in head coach Art Brile’s system and has completed 62.5 % of his passes for 995 yards with 15 touchdowns and 4 interceptions. Russell’s main target has been wide receiver Corey Coleman who has 17 receptions for 460 yards with 8 touchdowns. Baylor wants to push tempo on Texas Tech and wants a high scoring game. Baylor feels they are built for a fast uptempo attack and feel that no other team in the Big 12 can outscore them. Baylor has had trouble when they are forced to methodically work down the field and complete short to intermediate routes.

Defensively, Baylor holds the edge over Texas Tech. The Bears have allowed 23 points per game and is very solid in the secondary allowing 161 passing yards per game. Defensive end Shawn Oakman is a disruptive force that leads the team with 2 sacks and can create pressure on Saturday afternoon. Baylor has 9 sacks as a defensive unit and will need do a better job in stopping the run against Texas Tech. The Bears are allowing 156 rushing yards per game and will need defensive tackle Jamal Palmer (2 sacks) to stuff the Red Raiders running lanes. Baylor is even in turnover margin and must be able to force turnovers to create field position for Russell and company. Baylor ranks 49th overall in FBS in redzone scoring defense allowing teams to convert 80% of the time.

Joseph Lisi a former ABC Sports college football researcher, is the owner of www.GOFORTHE2.COM. He is a member if the FWAA (Football Writers Association Of America),Maxwell Football Club and is currently the content editor at www.2FiveSports.com. He contributes regularly to www.Sid-Rosenberg.com and has been a featured guest every Tuesday night from 10:30-11:30pm EST on Yahoo Sports Radio With Ken Thomson(www.sportsxradio.com).

Joseph Lisi is a member of the FWAA (Football Writers Association of America), the Maxwell Football Club and the National Football Foundation. He is the owner of the website: www.goforthe2.com and hosts a weekly college football radio show on SB Nation Radio and FNSTY Sports Radio from 10-12pm EST every Saturday morning. Listen live at: www.sbnationradio.com or www.fntsy.com/radio. Joseph is a former college football researcher for ABC Sports and has been featured on: SportsXRadio with Ken Thomson, ESPN Radio, Sirius XM Radio, FNTSY Sports Network, the Sid Rosenberg Show (640 AM Sports-South Florida), 1560 AM CBS Sports Melbourne, FL and multiple media outlets throughout the nation. Joe appears every Friday with Ken Thomson on SportsXRadio for the Football Fiasco in which every game on the college board is broken down during the show. Follow Joe on Twitter: @goforthe2
@https://twitter.com/GOFORTHE2
Previous Week 5 Notre Dame vs. Clemson “Inside The Numbers”
Next Week 5 CFB Predictions