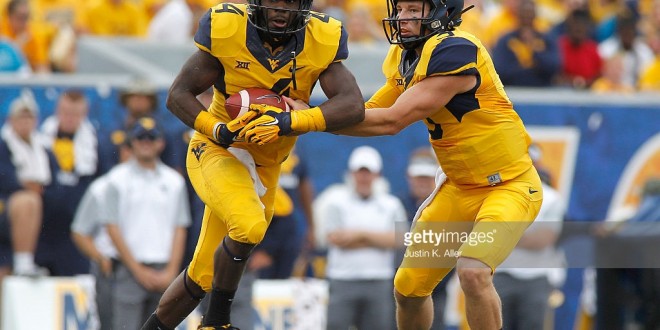 Week 7 West Virginia vs. Baylor “Inside The Numbers”

Notes: West Virginia is 2-1 over the Baylor Bears since 2011 including last season’s 41-27 victory in Morgantown. In the loss last year, Baylor committed 18 penalties for 218 yards and won the turnover battle 3-0. However, the Mountaineers out-gained the Bears by a margin of 456 to 318.

West Virginia is coming off of a disappointing home loss to the Oklahoma State Cowboys in overtime 33-26. On the season, the Mountaineers are averaging 36.0 points per game and have had a balanced offensive attack rushing for 222 yards and passing for 266 yards per game. Led by quarterback, Skylar Howard, who is completing 61.6% of his passes for 1,277 yards with 11 touchdowns and 5 interceptions- the Mountaineers have the ability to score on every possession. Howard can make plays with his legs and will be counted on this Saturday to make solid decisions in the passing game against the Bears. The running game will be the key in order for the Mountaineers to get the victory on Saturday. If West Virginia can slow down the game the way they did against Oklahoma State, they will have an opportunity to pull off the upset. Running backs Wendell Smallwood and Rushel Shell form a dynamic one-two punch for the offense. Smallwood, is a shifty back who can hit the running lanes with great acceleration and leads the team with 589 rushing yards averaging 6.6 yards per carry with 5 touchdowns. Shell is the tough inside runner who wears down opposing defensive fronts and has 266 rushing yards with 3 touchdowns on the year. Look for West Virginia to get wide receiver Shelton Gibson involved in the offensive scheme early on. Gibson leads the team with 20 receptions for 448 yards and 5 touchdowns.

Defensively, the Mountaineers will need to keep the big plays at a minimum on Saturday afternoon. Through the team’s first five games, the defense has played very well against the run and is yielding 140 yards per game. Overall, West Virginia is allowing 20.0 points per game and is +5 in turnover margin. In order to get the road victory over Baylor, they will need to slow down the game and force longer drives from the Bears. West Virginia has 10 sacks on the season and will need to try to find ways to get pressure on  Baylor quarterback Seth Russell. Baylor has only allowed 5 sacks through the first five games and looks to get the ball out in three seconds in their passing scheme. West Virginia will have success if they are able to shut down the Bears rushing attack and force Russell into becoming one dimensional. Look for the Mountaineers to gamble early onto force mistakes and disrupt the timing of the Bears offensive attack.

The Bears have been hitting on all cylinders offensively entering this match-up and will look to run the Mountaineers out of the stadium on Saturday afternoon. Baylor is averaging 64.2 points per game and is totaling 725 total yards per game (1st in FBS). The Bears have a balanced attack that is rushing for 357 yards per game and throwing for 367 passing yards per game. Quarterback Seth Russell is completing 63.8% of his passes for 1,527 yards with 22 touchdowns and 5 interceptions this year. Running back Shock Linwood is having an excellent season and is averaging 9.5 yards per carry  (719 yards) with 7 touchdowns. Tempo is the key to the Bears scheme and head coach Art Briles loves to put pressure on opposing defenses by running plays within a short amount of time. This approach forces defenses to read coverages quickly and creates mismatches throughout the field for the Bears wide receivers. Casey Coleman leads the team with 31 receptions for 678 yards and 13 touchdowns and teammate Jay Lee is second on the team with 18 receptions for 405 yards with 4 touchdowns. K.D Cannon is a another receiver that has contributed with 13 receptions for 232 yards with 3 touchdowns.

Defensively, the Bears are allowing 22.2 points per game and are +5 in turnover margin on the year. The Bears are giving up 129 rushing yards per game and have surrendered 234 yards through the air. Baylor has recorded 11 sacks on the season and will look to get pressure on Sylar Howard on Saturday. Defensive end Shawn Oakman leads the team with 3 sacks and is often double teamed because of his great size standing 6’9 and weighing 275 pounds. Linebacker Grant Campbell leads the team with 39 total tackles and is the emotional leader of the Bears defense. The game plan against West Virginia should be to force quarterback Sylar Howard to beat the Bears over the top. Baylor will look to stuff the running lanes of Smallwood and Shell which would make West Virginia one dimensional. By creating third and long situations, the Bears can take chances by blitzing Howard which can create pressure on the Mountaineers offensive line that has allowed 17 sacks on the season.

Joseph Lisi is a member of the FWAA (Football Writers Association of America), the Maxwell Football Club and the National Football Foundation. He is the owner of the website: www.goforthe2.com and hosts a weekly college football radio show on SB Nation Radio and FNSTY Sports Radio from 10-12pm EST every Saturday morning. Listen live at: www.sbnationradio.com or www.fntsy.com/radio. Joseph is a former college football researcher for ABC Sports and has been featured on: SportsXRadio with Ken Thomson, ESPN Radio, Sirius XM Radio, FNTSY Sports Network, the Sid Rosenberg Show (640 AM Sports-South Florida), 1560 AM CBS Sports Melbourne, FL and multiple media outlets throughout the nation. Joe appears every Friday with Ken Thomson on SportsXRadio for the Football Fiasco in which every game on the college board is broken down during the show. Follow Joe on Twitter: @goforthe2
@https://twitter.com/GOFORTHE2
Previous Week 7 Penn State vs. Ohio State “Inside The Numbers”
Next Week 7 CFB Predictions